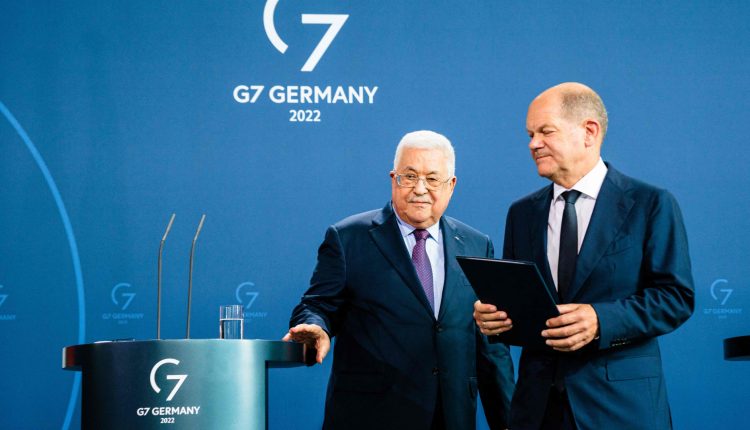 At the end of a press conference with Chancellor Scholz, Palestinian President Abbas described Israeli action against Palestinians as a holocaust. Scholz remained silent but was visibly upset. Later he expressed himself and found clear words.

The President of the Palestinian Authority, Mahmoud Abbas, caused a scandal during his visit to Berlin. After talks with Chancellor Olaf Scholz, he accused Israel of a “Holocaust” against the Palestinians. “Israel has committed 50 massacres in 50 Palestinian towns since 1947 to this day,” said Abbas at a press conference with Scholz in the chancellery. “50 massacres, 50 holocausts,” he added.

He had previously been asked by a journalist whether he would apologize to Israel on the 50th anniversary of the attack on the Israeli Olympic team by Palestinian terrorists in Munich. Abbas said there were dead people killed by the Israeli army every day. “If we want to continue digging into the past, yes please.” In his reply, Abbas did not address the attack on the Olympics, in which eleven Israelis were killed.

No arguments at the press conference

Scholz followed the statements with a petrified expression, visibly annoyed and also made preparations to reply to them, among other things ARD correspondent Christian Feld has observed. Scholz’ spokesman Steffen Hebestreit had declared the press conference over immediately after Abbas’ answer. The question to the Palestinian President had previously been announced as the last. According to the dpa news agency, Hebestreit later reported that Scholz was outraged by Abbas’ statement.

“Relativity of the Holocaust intolerable and unacceptable”

In the “Bild” Scholz later rejected the Holocaust accusation with clear words. “Especially for us Germans, any relativization of the Holocaust is unbearable and unacceptable,” said the Chancellor.

Scholz had previously criticized Abbas in the press conference for describing Israeli politics as an “apartheid system”. “I want to say explicitly at this point that I don’t adopt the word apartheid and that I don’t think that’s the right way to describe the situation,” said Scholz.

Abbas had previously said the “transformation into the new reality of a single state in an apartheid system” does not serve security and stability in the region.

EU countries: Rules for artificial intelligence for the first time