After just one year – Donata Hopfen is no longer DFL boss 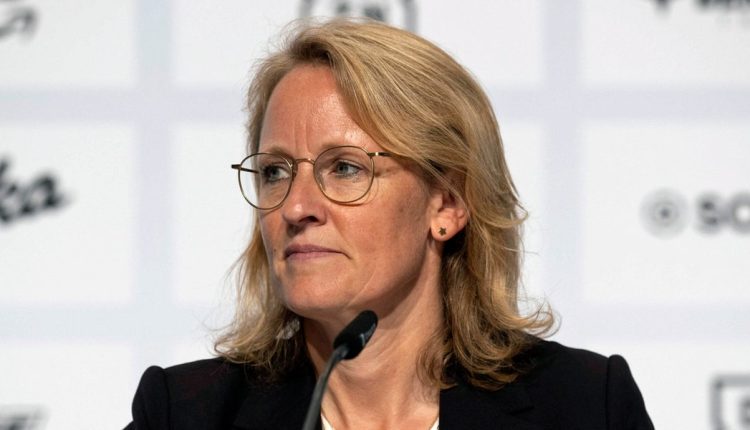 The DFL announced on Wednesday that the reason for the separation was different ideas about the further strategic direction of the company. The 46-year-old had only assumed the chairmanship of the committee at the beginning of the year as the successor to Christian Seifert. Her contract originally ran until the end of 2024.

The successor has not yet been officially clarified, the experienced club managers Axel Hellmann (Eintracht Frankfurt) and Oliver Leki (SC Freiburg) are the favorites as co-bosses. The duo is to lead the professional association on an interim basis until the hop successor has been settled. Should both harmonize after the probable appointment, the dual leadership with clearly defined work areas could also establish itself as a long-term model. For the new season, the management is to be redistributed again.

“I started the right things”

“I’m grateful for the time and the work with the clubs and my team,” Hopfen was quoted as saying in a DFL statement. She wishes those responsible “the necessary courage and will to change” in the face of “growing challenges. It was an intense time, I got to know and appreciate many great people. I’m going with the knowledge that I have initiated the right things.”

In the social network “LinkedIn” the Hamburg resident complained about a lack of support. “Like many before me, I came into this job from outside, as a non-soccer player, as a woman with a clear plan of how the DFL can be led into the future: digitally, internationally and with strong partners and shareholders.” it in a statement. “Such a transformation is a feat of strength and requires courage. You often act on new terrain, positive results usually only become apparent much later. For all of this you need staying power, the support and the joint action of all stakeholders. I have this on no longer felt the end.”

The critics are not convinced

Hopfen came to the DFL as a career changer. The “Media Woman of the Year” had previously worked for the management consultancy Accenture in 2014, then for 14 years for the Axel Springer publishing house and finally for the consulting firm BCG Digital Ventures. Now the first woman at the head of a large German football association has failed.

Large parts of the DFL committees and the 36 professional clubs were dissatisfied with Hopfen’s work. According to her critics, she has not made any decisive progress on numerous construction sites such as the 50+1 rule, digitization, the entry of an investor, foreign marketing, the new basic contract with the DFB and the upcoming tender for media rights.

The 50+1 rule only applies to German professional football and is intended to ensure that the registered parent club retains decision-making power even if it has spun off its professional football department into a corporation. It limits the influence of external investors. The Cartel Office had approved the principle of the investor rule in principle, but at the same time called for solutions with a view to the exceptions of Bayer Leverkusen, VfL Wolfsburg, TSG Hoffenheim – and in some cases RB Leipzig. The DFL has not yet been able to show this.

Hannover 96 failed in court to get rid of managing director Martin Kind. A hitherto unpublic contract shows why. Has the 50+1 rule been broken? more