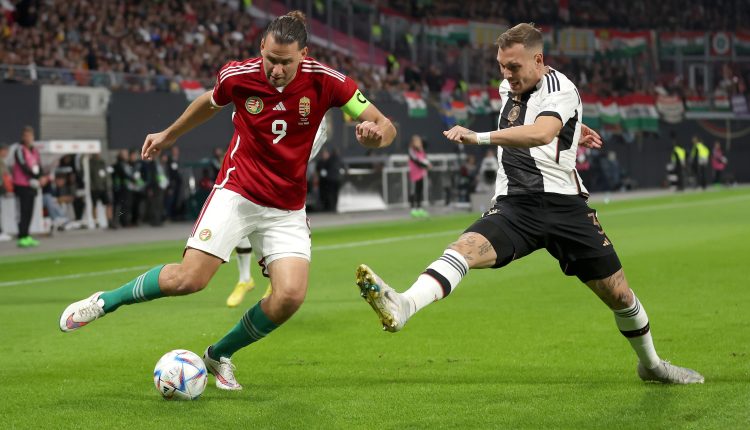 Hansi Flick has just under two months and only two international matches left before the DFB team starts the World Cup in Qatar. There is a lot of work to be done, as the Nations League game against Hungary showed.

The fact that Flick conceded his first defeat as national coach with the 0: 1 and that things are no longer looking good for the Germans in Nations League A, victory in Group 3 is out of reach, are side notes. However, the fact that until the World Cup only the game next Monday (September 26, 2022, live ticker at sportschau.de) against England and a test against Oman will take place is worrying in view of this idea.

Kimmich: “We missed everything”

“In the first half we didn’t happen at all, we missed everything,” said Joshua Kimmich afterwards on ZDF. “We didn’t get our virtues on the pitch at all.” Thomas Müller analyzed: “You could already tell that many of us aren’t having an easy time at the club right now. There will be a lot of criticism now, but we know that we can do much better.”

National coach Flick admitted: “We lacked the courage and made far too many simple mistakes. It was better in the second half, but then we have to score a goal.”

Many bad passes, no build-up game

The Hungarians, who are not qualified for the World Cup, but recently brought England a historic 0-4 home defeat in the Nations League, started surprisingly offensively. In front of a full house in Leipzig, coach Marco Rossi’s team forced the DFB team to make a series of play errors and very effectively prevented the Germans from building up.

Flick had relied on his preferred 4-2-3-1 system with Timo Werner in the lead instead of Kai Havertz in order to establish the stylistic device of “deep runs” with Werner’s speed – but there was no sign of that for a long time. Werner, Serge Gnabry and Leroy Sané repeatedly offered sprints behind the Hungarian chain, but Ilkay Gündogan and Joshua Kimmich either didn’t play the passes at all or were too imprecise.

The visitors deservedly took the lead after 17 minutes – with a spectacular goal from an old Bundesliga acquaintance. Adam Szalai, who used to work for Schalke, Hannover and Hoffenheim and ultimately retired for Mainz, is now 34 on a farewell tour with his national team. He showed what he’s still capable of after a corner from the left: with his back to goal, the center forward lobbed the puzzled Marc-André ter Stegen with a back-heel into the far post.

The DFB team wobbled extremely. Niklas Süle and Antonio Rüdiger let themselves be taken by surprise by a quick free kick, Daniel Gazdag appeared free in front of Ter Stegen, but the Barça keeper prevented the 0:2 (25th) with good positional play. With their own possession of the ball, Germany continued to come up with incredibly little, there was a lack of speed, creativity, a feeling for the few free spaces and, above all, the courage to open a risk pass.

First chance to score just before the break

Only six minutes before the change of sides did the Germans manage to develop a little goal threat for the first time. But Thomas Müller headed David Raum’s left flank right into Péter Gulácsi’s arms. At the break, the Leipzig crowd whistled, and Flick watched a few video sequences on his laptop before going into the dressing room.

The first consequence of this was a change for the second round: Thilo Kehrer came in for the weak Gnabry, Jonas Hofmann moved up a position from the right back. Apparently, Gündogan had also received clear instructions: he finally dared to pass behind the Hungarian five-man chain, which at least resulted in a great chance for Sané (52′) and an offside goal from Müller (53′).

Many ball losses, but at least more effort

It was also very noticeable in the second round: the Germans continued to make mistakes at an alarming rate, but the recapture of the many misplaced balls worked much better now. A little more aggressiveness was recognizable, sometimes an attempt at direct combinations, but the DFB-Elf remained miles away from lightness and self-evidence.

In the last 20 minutes, Flick then tried the creative players Havertz and Jamal Musiala, but it only became dangerous after two violent shots from Kimmich. On the other hand, Ter Stegen had to save in the final stages of two Hungarian counterattacks against Martin Ádám and László Kleinheisler, so the defeat could have been even worse.

Election in Italy: According to forecasts, the radical right is ahead

Seven people taken to hospital after…

SpaceX launch from Florida seen across…

Giorgia Meloni and her far-right…

Important alert from the UAE Embassy in…

The High Council of Public Finance…