“We have the policies we deserve”: the great fatigue of professionals in representative democracy 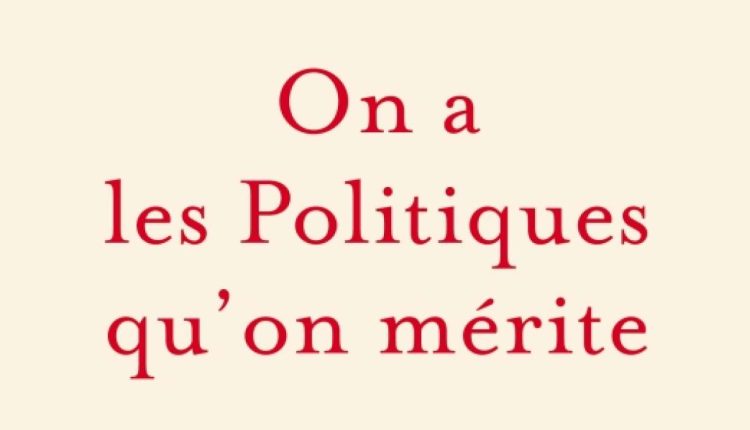 Delivered. It is a perilous exercise to which Chloé Morin, political scientist associated with the Jean Jaurès Foundation and specialist in public opinion, is working: to make us touch the humanity of men and women politicians to demonstrate the danger that there is to ask too much of them. We have the policies we deserve is halfway between the collection of interviews and analysis. On occasion, he does not neglect provocation.

Read also Article reserved for our subscribers Dominique Rousseau: “We are at the end of a cycle, that of a representative democracy thought out at the end of the 18th century”

“It is unpopular, and even probably a little indecent, to say that the life of elected officials and their collaborators is a professional life that can be difficult. Psychologically, it is indisputable, but sometimes also physically and financially”, supports the author, by summoning two of the most disparaged figures in French political life: Isabelle Balkany on the one hand, Manuel Valls on the other, with whom she worked at the Ministry of the Interior for several years. “Trust is the fuel of politicians. (…) How to react when it is supplanted by indifference, by detestation? » The political scientist tries less to formulate solutions than to convey the exhaustion of a system and its incarnations.

The ordeal of the mandate

Not seeing her children, living in fear of attacks, of little words taken out of context… Chloé Morin lists the many disadvantages of elected life. Political speech is welcomed without filter. Which leads to some interesting confessions, for example from Myriam El Khomri: “I was seen as incapable, a puppet. It’s awful. It stuck to my skin. » But also allows some of his interlocutors to unfold a campaign speech without hesitation. Emmanuel Macron replied in writing as follows: “If I had chosen the easy way, I would not have left my profession, I would not have resigned from the public service and (…) created my own movement to break with a breathless political system. »

On the left, if Yannick Jadot and Anne Hidalgo are described as being grappling with an ever more distrustful public opinion, Jean-Luc Mélenchon, who declined the invitation to testify, finds himself confined, with Eric Zemmour and Marine Le Pen, to the role of agitator “visceral rejection of a system”. “They are called Le Pen, Zemmour, Mélenchon. Monsters that are ours »writes the political scientist, clearly marked by the analysis of “irreconcilable lefts” made by Manuel Valls. Critic of the reinforcement of the requirements of transparency and exemplarity, the political scientist comes out against the “Anne Sinclair Jurisprudence”, which wants the spouses of politicians to refrain from doing their media coverage… Seen as a personal experience, elective office quickly becomes a torture. The corollary of the author’s thesis was interesting – what are these citizens worth who demand everything from their leaders without imposing anything on themselves politically? – but is in the end barely touched upon, swallowed up by the abundance of speeches from elected officials.

You have 2.58% of this article left to read. The following is for subscribers only.