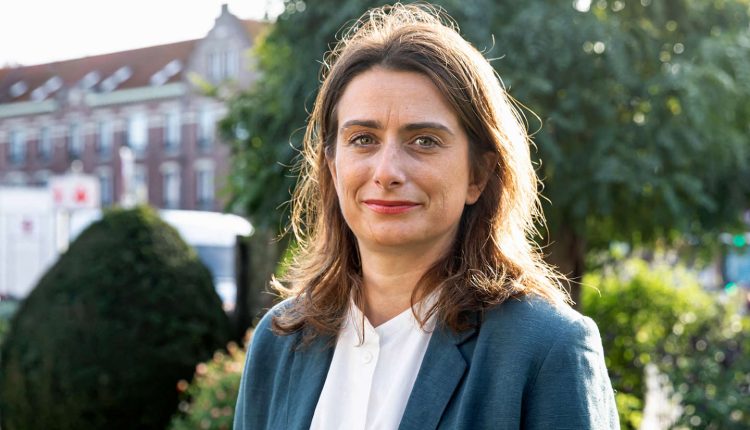 We find Marine Tondelier at La Navigation, a clean but cold tobacco bar on boulevard Morland, in the 4e district of Paris. This Thursday morning, at 8:30 a.m., the regulars have not yet arrived. Sitting at a table, a large travel bag by her side, she finishes her breakfast. “You want a puff pastry? », she offers, finishing her makeup.

Marine Tondelier, 36, green eyes, messy brown hair and the appearance of a good friend, does not live in Paris, although she has a full-time job there. She juggles between telework and round trips by TER to Hénin-Beaumont (Pas-de-Calais), where she lives. This week, she slept with activists. And obviously did not watch the Blues’ first World Cup match against Australia, heartbreaking for this football fan. “I can’t, it disgusts me to continue with the air-conditioned stadiums of Qatar the day after COP27”, justifies this RC Lens supporter.

Since the legislative elections, she has toured France to convince members to elect her as national secretary of Europe Ecology-The Greens (EELV). After our meeting, she will go to her office, located a few steps away, then go to the Mayors and Local Authorities Fair, Porte de Versailles, before jumping on a train, heading for Rennes, to meet members.

She doesn’t know it yet, but her vigorous campaign has paid off. On November 26, the program of this former collaborator of Cécile Duflot obtained in the first round of the congress nearly 47% of the votes, ensuring a smooth election on December 10.

Unknown to the general public, Marine Tondelier left K.-O. the contributions of the candidates of his two most media rivals, Sandrine Rousseau and Yannick Jadot, in open warfare for weeks.

Internal quarrels spread out in the public square, which the future patroness of the Greens condemns: “When we say bad things about an ecologist in the press, we say bad things about ecology”, she judges. Between Jadot and Rousseau, however, it is difficult to define the political line of Marine Tondelier. Of course, she calls herself “radical”but Yannick Jadot “the real” too, now.

If she has no equal in recounting her fights against palm oil, diesel or soil pollution, this vegetarian is not the type to develop political concepts. MEP David Cormand defends her: Marine Tondelier is a ” intuitive eco”, who bases his story on “things that can be appropriated, and not evanescent”.

You have 66.49% of this article left to read. The following is for subscribers only.