Sciences Po Strasbourg: a program to cultivate the ambition of future scholarship students 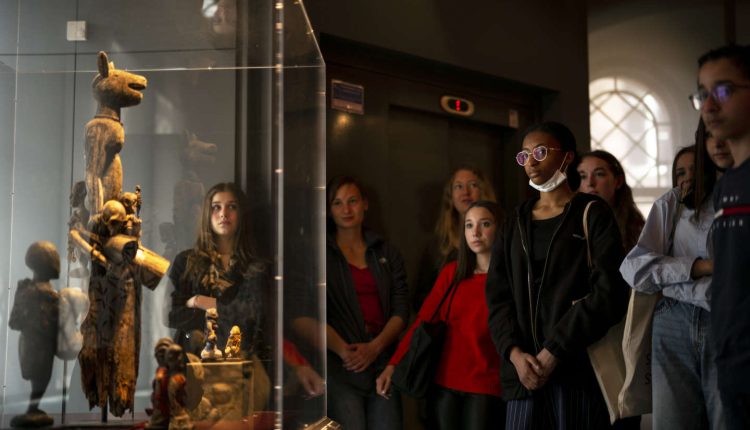 The students installed in an amphitheater of the Institute of Political Studies (IEP) of Strasbourg, at the Cardo, seem very young this afternoon. And for good reason. For the moment, these pupils of 1D just imagine students here. Their dream could come true from the start of the 2023 school year, if they pass the competition next year.

Living in the shoes of a pupil of this prestigious school during their first week of spring vacation is part of the integrated studies program – PEI, pronounced “pay” – from which 128 high school students in the Grand-Est region benefit this year.

At break time, Dorssaf Sayari and Lucas Morin-Haas, students at Robert-Schuman high school in Haguenau, about thirty kilometers away, chorus that they have “three times more likely to have the competition with PEI”. According to the latest assessment provided by the school, more than four out of ten students, participating in this program and taking the competition, manage to integrate an IEP, while the average success rate in the competition is only 13%.

“We currently have 30% scholarship holders in the school. We are progressing “, rejoices Anne-France Delannay, in charge of this program. At the initiative of the Sciences Po Network, it has been deployed since 2007 in seven IEPs. Launched in Strasbourg with just one high school in the city, PEI now involves thirty-three high schools from across the Grand-Est region.

Read also: Article reserved for our subscribers Strasbourg-Kehl, a tram for Europe…

Referent teachers identify students from working-class categories and living in priority neighborhoods for urban policy or rural areas. They accompany them throughout the year in the preparation of the common competition for the IEP of the Sciences po Network, including that of Strasbourg.

This afternoon, Anne-France Delannay is giving the dissertation methodology course there. The teacher knows what is at stake here: “Our goal is to succeed in cultivating ambition and lifting self-censorship in student orientation projects, so that they do not orient themselves according to their social or geographical origin. »

Having become a lecturer in management science, Anne-France Delannay has known self-censorship well. In 1992, the high school student from Arras, in the Pas-de-Calais, did not dare to take the Sciences Po competition. She owes her integration into the IEP to her honors in the baccalaureate. His parents did not study.

Read also: Europe: “You don’t fall in love with a growth rate or a structural fund”

Those of Lucas Morin-Haas either. His profile strongly resembles the composite portrait of the student targeted by the program. His mother stopped at the end of college, his father at the vocational baccalaureate. Future scholarship holder, he will, as such, be exempt from IEP tuition fees, if he integrates it. “Supermotivated”, the high school student is already anticipating the cost of his student life by filling supermarket shelves every Saturday. He will be the “first student of the family”.

Supporting assessment, the teacher is delighted to note that “beneficiaries of the program who fail or do not present themselves to the competition continue their studies”. According to the latest survey carried out by the school, the majority of them (60%) joined the university benches, mainly in law, at the start of the 2021 school year.

“Failing the competition does not prevent you from having a great career”, abounds Fabrice Robardey, PEI referent teacher at Jean-Jacques-Henner high school, in Altkirch, in the Haut-Rhin. The career of Jawad, one of his former students, perfectly illustrates his point. After a failure in the competition, the high school student began studying law with the idea of ​​ironing it. “He finally went on to a master’s degree in international law, in Zurich, and he now works in a large law firm in Luxembourg”rejoices the teacher.

Over a year of support, Fabrice Robardey sees the horizons of his students broaden, as was the case for Claire. With a general average of 19.5, this former student, beneficiary of the PEI, began to imagine herself in preparation at Fustel-de-Coulanges, a high school in downtown Strasbourg, then at the Lycée Henry-IV, in Paris. “Claire finally dared to try Sciences Po Paris. She was taken. She went to third year near New York and opted for the school’s master’s degree in journalism., rejoices the referent. He compares : “We are like sports coaches. We prepare young people gradually, first at regional level, then nationally. »

The program manager adds that those who fail the competition are “more and more people are going to selective courses”. In 2021, one in ten former beneficiaries of the PEI program joined a preparatory class for the Grandes Ecoles.

Between this spring and next, students in 1D selected for the program this year will have studied three weeks at the IEP – all expenses paid – on their short vacation. Fabrice Robardey sees his students return “with stars in their eyes”.

The objective of stays at the IEP is also to discover the opportunities of student life, from the university restaurant to the museum. About fifteen minutes on foot from the Cardo, another group of future higher education scholarship holders listen attentively to the lecturer from the Vodou Museum.

This week, the trainees will also spend an afternoon at the Tomi-Ungerer Museum and an evening at the opera. A first for almost all of them, like Mona Larraj, 17 years old. “First time in boarding school, without my parents, in Strasbourg, and at the opera”, she lists. Faced with a heap of wax castings, which she has just learned is a voodoo deity, the high school student from Troyes says to herself at the same time “intimidated by the big city” and happy to be out of his element.

Read also: What young French and Germans expect from Europe

Chloé Becker, 19, who accompanies the group, experienced this. The former beneficiary of the PEI is from Forbach, in Moselle. Currently in her second year at the IEP, she is involved with these high school students to “give back what she got”.

“Say thank you and give to others”, this is also what prompted Camille Dupont, 30, to support the rise of the PEI. She joined the Strasbourg IEP in 2009, after having benefited from the program in Lille. Concerned about ” share [son] experience and see what could be developed”, she offered to help. Anne-France Delannay opened her door to him.

At the time, only a dozen students from the Jean-Monnet high school in Strasbourg were involved in what was then only preparation for the competition. The network of partner high schools has gradually expanded. The program has been enriched by immersions at the IEP, the sponsorship of each beneficiary by a student and cultural activities.

Camille Dupont now works in London for a foundation. The young lady – “from a mining background” and “accustomed to great social and ethnic diversity” – is responsible for “diversification of profiles in the media”. Thirteen years after entering the IEP, she has not forgotten ” the efforts “ and ” pressure “ for “integrate socially” when he arrived, when others seemed to him “naturally in their place”. The PEI program now extends to middle school, from the 4andin order to broaden the spectrum of students likely to feel “naturally in their place” at Sciences Po. A challenge.

This article is produced within the framework of the European night, organized on Saturday May 21, 2022 by Sciences Po Strasbourg in partnership with The world. Free event and all public.
15
Share
You might also like More from author
France