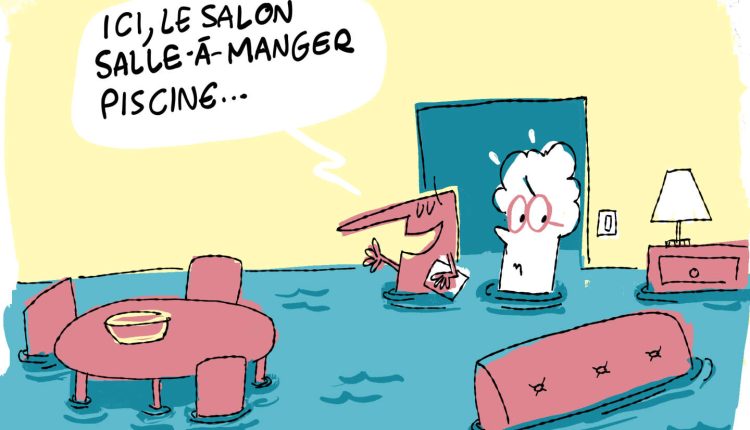 Buy in a flood zone or avoid these territories at all costs? When considering buying a house, the question often arises. The flood is indeed in France, according to the ministry of the ecological transition, “the first natural risk by the extent of the damage it causes, the number of municipalities concerned, the extent of flood-prone areas (27,000 square kilometers) and the populations residing in these areas (5.1 million people)”. About 16,000 municipalities have part of their territory in a flood zone, including 300 agglomerations.

However, the damage in the event of an accident is considerable: in addition to the presence of water in the accommodation, and damaged or washed away property, the electrical system can also be damaged. Once the disaster is over, fungi and mold may appear due to humidity. And if the flood lasts a long time, it can weaken the foundations of the house.

“At the CLCV, we advise against buying in a flood zone”, indicates David Rodrigues, lawyer within the consumer association.

Risks not to be taken lightly. “In absolute terms, at the CLCV [Consommation Logement Cadre de vie], we do not recommend buying in a flood zone. But those who will start anyway must absolutely find out about the frequency and intensity of the floods », indicates David Rodrigues, lawyer within this association of consumers. Information that can be found at the town hall or in the “state of risks and pollution”, a document provided no later than the signing of the promise to sell.

The buyer will find there a precise mapping of the risk of flooding if the town is subject to a flood risk prevention plan (PPRI), with different colors depending on the risk. The law also obliges the seller to report in writing all claims giving rise to the payment of compensation for natural disasters during the period in which he was the owner, or of which he was informed when purchasing the property.

“If the building is in the red zone, it will be difficult to insure. I advise buyers to include a condition precedent in the promise of sale, specifying that the transaction will only take place if they obtain multi-risk home insurance covering the risk of natural disasters »Explain Cécile Rouquette-Térouanne, associate lawyer at Cornet Vincent Ségurel.

Read also When the insurer refuses to use its storm guarantee

Please note: if over time, the probability that a loss occurs increases, or that the risk described in the underwriting changes, the insurer may terminate the contract for “aggravation of the risk”. Similarly, the insurer can mention in the contract that the latter will be automatically terminated after a first claim. And without insurance, the financial impact of a flood can be very heavy for the owner…

You have 54.16% of this article left to read. The following is for subscribers only.