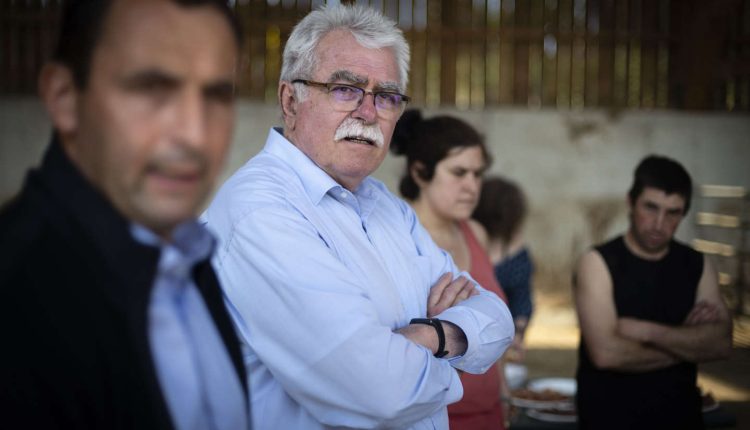 André Chassaigne is not one to ring the bell before entering. So, Tuesday, May 17, after having greeted the whole market in the village square of Viverols, located in the south of the fifth district of Puy-de-Dôme, the outgoing deputy campaigning for his re-election invites himself to the butcher “to say hello”through the service door.

With his meter ninety, his white mustache, his thick eyebrows and his imposing gestures, the elected communist is at ease everywhere in this territory which he has been plowing for more than twenty years. There, the Auvergnat, who has the art of familiarity and easy humor, is nicknamed “Dédé” and has made his image of elected “old-fashioned” a pledge of sympathy and credit. Mayor of his small town of Saint-Amant-Roche-Savine for twenty-seven years, the 71-year-old elected first climbed the local ladder as general councilor (1979-2004) then regional councilor (1998-2000 and 2010 -2015), before becoming a deputy in 2002.

Read also: Article reserved for our subscribers The Nupes presents its program: a left-wing government alliance, 650 measures and 33 “shades”

In fact, the former college principal knows his predominantly rural constituency by heart, which extends around Ambert, Thiers and, since 2012, over part of the Limagne plain. Renewed again with flying colors in 2017 – with 63.55% of the votes in the second round against the candidate of La République en Marche (LRM) – the outgoing deputy had first planned not to re-enlist, before changing his position. notice.

So here he is again for his fifth legislative campaign in a row, with a five-week marathon on the program and one objective: to make a trip to each of the 132 municipalities that make up his constituency.

Image of “good student” at the Assembly

In Viverols, where a dozen people came to discuss with him on May 17, André Chassaigne is accompanied by his alternate candidate, Julien Brugerolles. He highlights his fight for the maintenance of public services in rural areas and defends his record concerning the mother of his battles: agriculture. During the term of office which is ending, he notably carried two bills, taken up by the majority and adopted in 2020 and 2021, allowing the revaluation of the minimum agricultural pension and that of the pensions of spouses and family carers.

If his only obsession is to” be useful “, and that he wants as proof the “1,200 files of individuals, companies or associations that[il] deals with [son] team every year »André Chassaigne scrupulously notes all the testimonies that come to him.

The former history and geography professor has not lost his sense of pedagogy either and likes to distribute, at the end of each meeting, various copies of his legislative work, straight out of a box he carries around across the district, “like a sales representative”.

You have 59.47% of this article left to read. The following is for subscribers only.