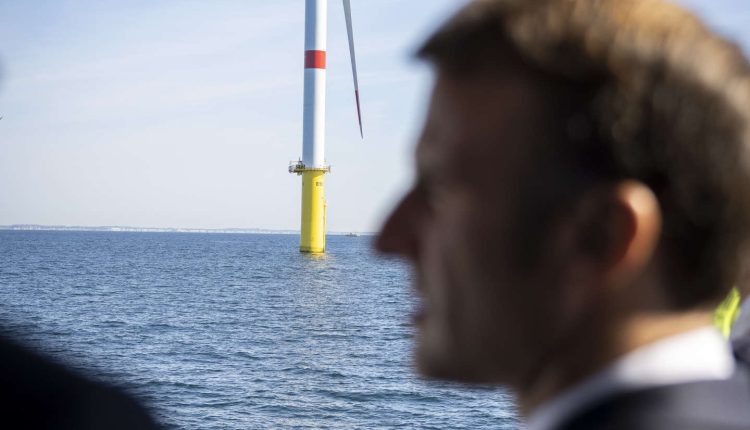 The blades the size of an Airbus spin after 80 white masts, off Saint-Nazaire (Loire-Atlantique), 15 km from the coast. The shuttle that embarks Emmanuel Macron and his delegation, Thursday, September 22, seems small in the middle of this forest of steel at sea, the first French offshore wind farm. It took fourteen years and four presidential terms for a head of state to finally inaugurate it. “A happy day! », celebrated Emmanuel Macron. Before admitting, mezzo voce, that“on the scale of a mandate, it is something terribly frustrating” to launch a project without seeing the results. In January 2011, Nicolas Sarkozy came here to announce the conquest of offshore wind power, decanted at the 2008 Grenelle environment forum, and the construction of Mistral ships promised to Russia.

Emmanuel Macron was not wrong. This is what the Head of State seemed to say when he took up the thread of his Belfort speech, which in February camped out an energy strategy on three pillars – sobriety, renewable, nuclear. A policy he considers “validated by the war in Ukraine” and its cynical corollary, the Russian gas blackmail of Vladimir Putin. “The key to energy is diversification”, he repeats since his nuclear shift. Satisfied with a choice of sovereignty that is far from materializing, he now wants “go twice as fast” in the deployment of renewable energies.

But the “glorious day” badly hides the wall that still stands in front of him. To hope to cover electricity needs that will jump “massively” of 40%, Emmanuel Macron stays the course: owning around fifty wind farms at sea by 2050. A power of 40 gigawatts within reach of construction sites. But France has fallen behind phenomenally. The Head of State could only observe, on three occasions, that “our neighbors are going much faster”. Alongside the 81 French offshore wind turbines, Belgium has 400, Denmark 630, Germany 1,500 and the United Kingdom 2,500… The French ambition for 2050 will reach the current British level.

Meanwhile, technology is advancing at a gallop. The fleet ordered ten years ago (6 megawatts) is no longer at the forefront of innovation (14 megawatts). “In 2011, we were on the front of the wave. Now we are behind, even if it remains a Ferrari”, admits Olivier de la Laurencie, director of the Saint-Nazaire wind farm. Impossible to start all over again. “It’s not like changing a light bulb”, quips Franck Louvrier, mayor of La Baule. Why does an offshore site hatch in five or six years in neighboring countries, compared to ten years in France? Blame the delays and recalcitrants, dismissed the head of state. And in particular to “dilatory remedies”. A problem in a competitive world, where Americans and British already equip their wind turbines in Cherbourg and Saint-Nazaire.

You have 60.78% of this article left to read. The following is for subscribers only.