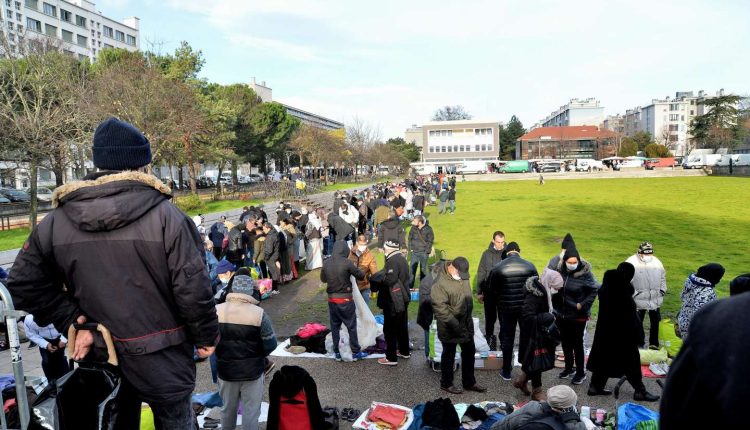 This Tuesday, November 29, the prosecutor of Lyon arrives without warning on the wild market of the United States, popular district of the city. Barely out of his car, surrounded by municipal police, Nicolas Jacquet sees a small crowd bustling about, stuffing objects into makeshift bags, and fleeing like a flock of sparrows.

“Here is my plague! You understand that this situation cannot last, the inhabitants are at the end of their tether”, says Olivier Berzane. The mayor of 8e district (Europe Ecologie-Les Verts, EELV) shows the magistrate a strip of land strewn with heterogeneous dishes and wrinkled clothes. About two hundred clandestine sellers set up shop three times a week on the strip of greenery adjoining the children’s playground.

The ride has been going on for three years. According to the mayor, their presence risks discouraging the stallholders of the nearby, official food market, which is held under the hall. “They take up all the space, leave trash, we’ve never seen that. We can no longer bring the children here”plague Nordine, 62, who has lived for thirty years in the small bar of HLM buildings opposite.

Sanctions with a citizen tone

What to do ? The Lyon justice system has been developing for two years an unprecedented protocol of “local territorial criminal policy”, which aims to track down the facts which degrade the daily life of the inhabitants. And provide them with a clear answer, to dissuade the perpetrators from reoffending. This system is implemented in close collaboration with the mayors of the territories concerned.

Also read the testimonials: Article reserved for our subscribers Mayors faced with rising threats and violence: “I was not elected for that”

During biannual meetings, the elected officials draw up a list of the facts that poison the life of the commune. Invasive occupation of public places, wild mechanics in car parks, excessive alcohol consumption, loud noise, dangerous dogs… Mayors report problem behaviors, bordering on delinquency. The prosecutor translates them into criminal language, in a six-page note which guarantees operations legal certainty and respect for rights. Twice a month on average, hearings reserved for incivility are held in houses of justice and law (MJD), in the presence of the mayor and the prosecutor’s delegate.

Repressive as well as educational, these hearings give rise to sanctions with a citizen tone: an action or a financial contribution in favor of an association helping victims. If the offender does not play the game, or talk about him again, the sanction turns into a fine, with priority recovery, set up between the prosecution and the management of the Public Treasury. “Once we have listed the actions to be carried out with the mayors, we provide the response within a short time, to send a message to the authors, but also to the inhabitants. This system restores the credibility of institutions. The feeling of insecurity is often fed by the facts felt on a daily basis. Our role is also to look for solutions to this part of delinquency which went under the radar »explains the prosecutor Nicolas Jacquet, browsing the underground market of the United States.

You have 46.39% of this article left to read. The following is for subscribers only.