Faced with inflation, the difficult daily newspaper for students: “I challenge anyone to live on 12.50 euros a week! » 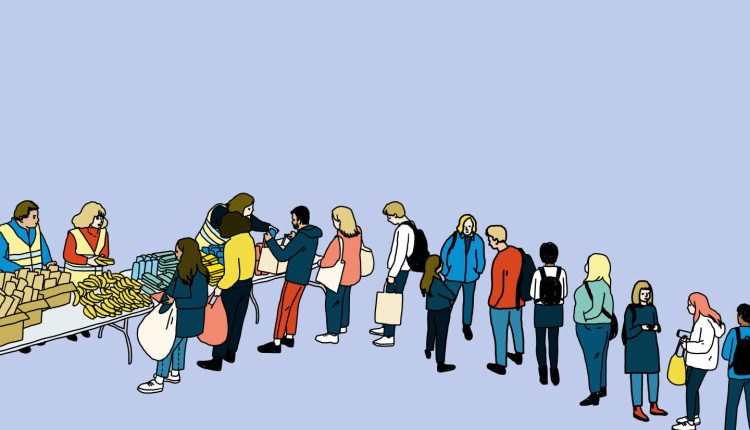 There is a feeling of deja vu. In front of the food distributions, the endless queues of students have never been empty since the start of the Covid-19 crisis. The images seem identical to those of the winters of 2020 and 2021. But precariousness is now knocking on all doors, as inflation weakens a population with already unstable finances.

The galley does not invite itself only in the rooms of the regional centers of university and school works (Crous) of 9 square meters: it also interferes with students from the middle class, alone or in shared accommodation, whose parents earn “too much” for them to be eligible for scholarships based on social criteria, or whose families, themselves affected by the price increase, can no longer put their hands in their pockets to continue to help them.

At 19, Laudine feels guilty for ” make someone pay “ his parents, both high school teachers. After two years of preparatory class in Poitiers, the young woman was accepted into a prestigious double degree at the Sorbonne. “I really hesitated to come to Paris, because of the pricessays this eldest of a family of four. My parents, separated, argued a lot about it. » Not stock market, because “just on the edge”Laudine found accommodation in a student hostel run by nuns.

The decoders: Precariousness: nearly 20% of students live below the poverty line

It is his father who finances all of his rent: 600 euros for a room of 10 square meters, with a shared kitchen and toilets on the landing. “But it’s all inclusive, and breakfast is included!” », says the student. For everything else, his mother gives him 180 euros a month – 80 euros for his train tickets to Poitiers, 100 euros for food. “She can’t do more, she is already obliged to give private lessons to be able to help me. When I get home, to save on shopping, she also prepares me some frozen meals. »

Granted according to the resources of the parents and the expenses related to the characteristics of the family, the scholarships have eight levels, from the highest (5,965 euros annually) to the lowest (1,084 euros annually). In France, this breakdown of amounts by level leads to threshold effects and, in fact, excludes an entire population from the middle classes.

Moreover, since this social protection system is “familialized” – students are first considered as the children of their parents, before being autonomous adults – some young people remain more dependent on family solidarity, and not all of them can work side by side. According to the latest “Living Conditions” survey by the Observatory of Student Life, published in 2020, nearly 43% of the monthly budget of students from the middle classes comes from their families, compared to 32% for students from working classes.

You have 70.66% of this article left to read. The following is for subscribers only.