“Drone” in “Le Monde”, from a radioactive cloud to individual freedoms 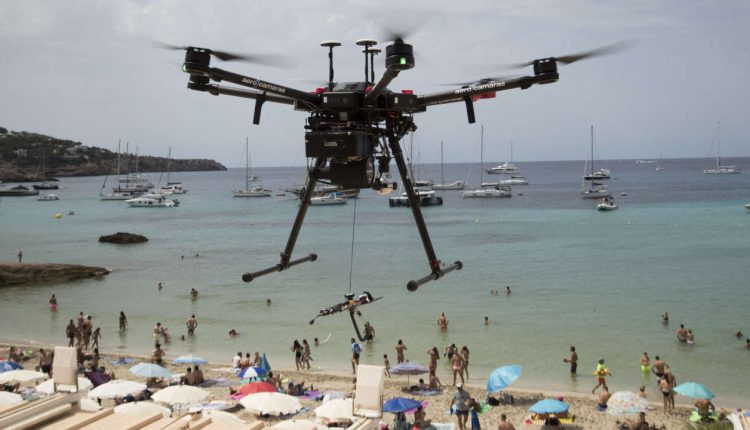 LMunicipal police officers will not be able to use it to monitor citizens, and the police will have to obtain the prior agreement of the prefect. Regarding the rest, the Constitutional Council validated, on Thursday January 20, the majority of the measures on the use of drones by the security forces to “the prevention of attacks on the safety of persons and property”, “the security of gatherings” on the public road, “the prevention of acts of terrorism” or “regulation of transport flows” and “border surveillance”.

A futuristic object par excellence, which now attracts as much as it worries, the drone is mentioned for the first time on July 3, 1946 in The world, in an anecdotal way, in the course of a report narrating the tests of atomic weapons in the atoll of Bikini. “Except for a bruise on the eye of a B 29 airman who dropped the bomb, caused by the upward reaction of the aircraft as it was lightened by the projectile, there are no reports of accidents. among the many personnel assigned to the experiment, readers learn. The only missing was an unmanned aircraft, what the British call “robot” (automaton) and the Americans “baby-drone” (baby-bumblebee). He fell into the sea before the bomb was even dropped. The other radio-controlled planes passed through the radioactive cloud well. »

On August 8, 1946, a brief indicates that “Two U.S. Army Drone superfortresses with no pilot on board broke the distance record for radio-guided aircraft,” i.e. 3,850 kilometres. A year later, journalist Edmond Delage, a specialist in naval matters, pointed out that“A bomb launched by a “Drone” would make an entire harbor unusable without a single pilot having to risk his life”.

Drones “require careful care and top-notch after-sales service. This is an obstacle to their widespread use. » The journalist Christian Tortel, in 1988

After these first experiments, it is necessary to wait several decades before the drone settles in the columns of the World. The use of these unmanned aircraft is no longer limited to the military field, says Christian Tortel, on April 27, 1988, in an article entitled “Funny “drones””. The journalist recalls that these “drone planes”, far from theaters of war, can ensure “Civil missions otherwise exposed: Etna, Antarctica, tropical clouds, smoke from nuclear power plants. » Volcanologist Haroun Tazieff uses it to approach craters. From there to predict the rise of these flying objects ? This is a step that the journalist does not cross, quite the contrary.

You have 62.13% of this article left to read. The following is for subscribers only.