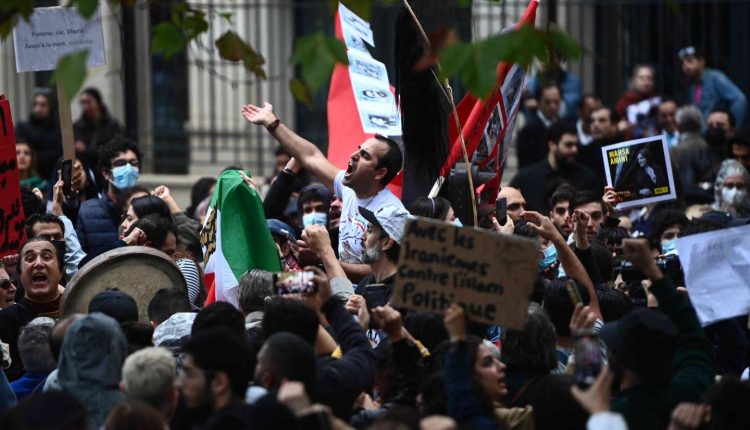 French police used tear gas on Sunday, September 25 to prevent thousands of people marching in Paris to protest against the repression of demonstrations in Iran from reaching the embassy of the Islamic Republic, according to journalists from Agence France -Hurry.

This second consecutive demonstration in two days in Paris to denounce the death in detention of Mahsa Amini, 22, arrested in Tehran on September 13 by the morality police for “wearing inappropriate clothing”

Leaving from the Place du Trocadéro, the Parisian procession headed for the Iranian Embassy to the sound of slogans such as “woman, life, freedom!” »echoing those of the demonstrators in Iran, or even “France, silence is enough”.

The participants particularly criticize French President Emmanuel Macron for shaking hands with his Iranian counterpart Ebrahim Raïssi during their meeting on September 20 on the sidelines of the United Nations General Assembly in New York, focusing in particular on a relaunch of the international agreement on Tehran’s nuclear program.

Read also: Article reserved for our subscribers In Iran, repression behind closed doors: “My cousin’s body and face are covered in bruises, but she refuses to tell”

A person arrested in Paris

The Paris police headquarters reported “4,000 people” gathered at Place d’Iéna. On several occasions, groups have tried to break through the roadblock set up by the security forces, who have resorted to “intermediate means of intervention” [gaz lacrymogènes] to repel them, according to the police headquarters. A person was arrested for “outrage and rebellion” and a policeman was slightly injured, the prefecture added.

In London, a rally was also held in a tense atmosphere near the Iranian embassy. “Protesters tried to cross the police roadblocks and threw projectiles at the officers”announced in a press release the British police, who reported five arrests.

Read the story: Article reserved for our subscribers In Iran, anger grows after the death of Mahsa Amini, which has become the symbol of the brutality of the regime

In addition, the European Union (EU) ruled on Sunday “unjustifiable and unacceptable” the use “widespread and disproportionate force” against protesters in Iran. In a statement on behalf of the EU, the head of European diplomacy Josep Borrell also condemns “the Iranian authorities’ decision to drastically restrict internet access and block instant messaging platforms”who “constitutes a flagrant violation of freedom of expression”.

In Iran, at least 41 people have been killed and hundreds arrested in Iran since the announcement on September 16 of the death of Mahsa Amini, according to the latest official report.