Climate: the youth marches mobilized much less than in 2019 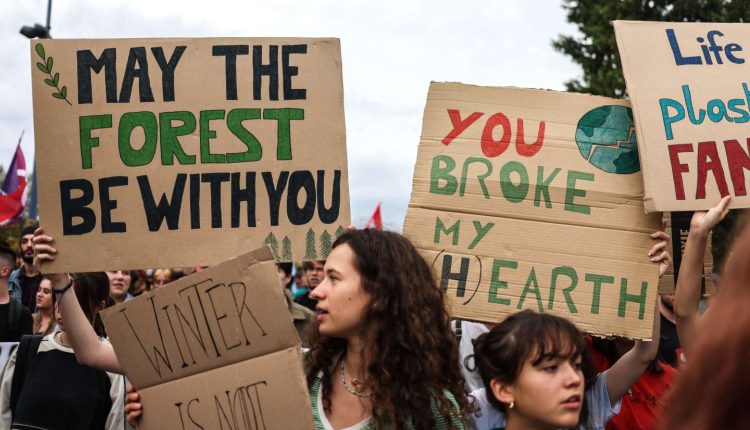 It’s a fail. The new world day of strikes for the climate failed to mobilize young people in France, where the movement brought together, on Friday September 23, only a few hundred people at most in large cities, far from the tens of thousands. of 2019 protesters.

In Paris, the procession organized by Fridays for Future France brought together between two hundred and three hundred people in the afternoon, according to a journalist from Agence France-Presse (AFP), far from the one thousand six hundred demonstrators identified in March . In March 2019, the first world march brought together between twenty-nine thousand and forty thousand people. Another march is however planned for Sunday in the capital, as well as in several cities, organized this time by the Youth for Climate France movement.

“To those who want to pollute the world, young people respond: resistance”chanted the demonstrators, joined by political activists from the Young Ecologists or La France insoumise. “The movement is turning into anger”estimated the ecologist deputy Sandrine Rousseau, who came to support the young people mobilized. “We absolutely need them, because inside the National Assembly there is a form of ignorance of the seriousness of climate change”she denounced.

Fridays for Future France had also called for marking this world day by demonstrating at 11:30 a.m. in front of the town halls instead of going to class. In Lille, a hundred young people gathered in front of the town hall, armed with signs “When it’s melted, it’s screwed”, “Nature is not just a wallpaper” Where “Act now or swim later” (“act now or swim later”), noted AFP. “We are not here to skip class. (…), but to revive the cause; it’s a bit dead after the Covid”Fannie Grandin, a student who has been involved in the movement since her college years, told Lille.

Read also: Article reserved for our subscribers “The cost of climatic hazards covered by insurance could double by 2050”

“We have eight hundred people who have reported striking on our site”in “five hundred establishments” schools, said one of the movement’s spokespersons, Pablo Flye, during a press briefing in Paris on Friday morning. “In 2019, the movement in France had been overwhelmed by the wave of mobilization and we were not structured enough. After the shortness of breath caused by [l’épidémie de] Covid, the catastrophic summer that we have experienced has remobilized us and we are ready to continue until we obtain victories for the climate, that is to say the respect of the Paris agreements”he added.

Other marches launched by Fridays for Future France were scheduled for late Friday afternoon, notably in Bordeaux and Toulouse. The organization does not plan to repeat these strikes every Friday and is considering other forms of mobilization in the long term.

Changing their mode of action, activists from Youth for Climate France chose for their part to block, for one hour on Friday, the entrance to a TotalEnergies site, denouncing a mega oil project in Uganda recently criticized by the European Parliament. Activists “no longer hold their signs sitting in front of places of political power, as Greta Thunberg did, but block capitalism’s places of power: multinationals specializing in fossil fuels”justified in a press release the organization.

At Le Bourget, near Paris, activists from Attac and Extinction Rebellion blocked a terminal of the business airport, to denounce “the climate crimes of the ultra-rich” who use private jets. Twenty activists, some dressed in white coats, positioned themselves to block access to a terminal which was covered in red paint, noted an AFP journalist. “In terms of take-offs and landings, there is no impact”said a spokesperson for Groupe ADP (formerly Aéroports de Paris).

“Private jets are the symbol of a way of life that destroys the planet”estimated on the spot Annick Coupé, spokesperson for the Attac association. “We want to stop the climate crimes of the ultra-rich”, she explained. Private jets have been the subject of controversy for several months, with environmental activists calling for their supervision, or even their ban. The minister delegate in charge of transport, Clément Beaune, said he was willing, at the end of August, to “to act and [à] regulate private jet flights ». But this proposal, which could be considered at European level, was not taken up at the top of the State.

Budget: the majority wants to extend the safety net for local communities