Eurovision 2022: Ukraine and Kalush Orchestra win the musical competition thanks to the public vote 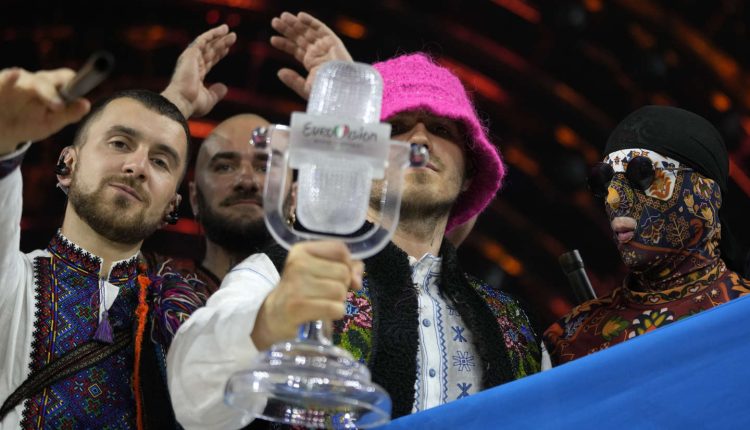 Ukraine won the Eurovision Song Contest in Italy on Saturday evening, ahead of the United Kingdom and Spain, thanks to the vote of viewers who voted for the group representing the country invaded at the end of February by Russian troops.

The group Kalush Orchestra, whose song Stefania mixes rap and traditional music, collected 631 points, ahead of Briton Sam Ryder and his title space man (466 points) and the Spanish singer Chanel with Slo-Mo (459 points). France, represented by the Breton group Alven & Ahez, finished penultimate in the ranking, ahead of Germany.

To relive: The Eurovision 2022 final marked by the war in Ukraine

Ukrainian President Volodymyr Zelensky welcomed his country’s victory at Eurovision on Saturday, making the connection with the Russian invasion: “Our courage impresses the world, our music conquers Europe”he commented on his Facebook page.

Written before the war, the lyrics of the song Stefania resonate strongly with current events (“I will always find the way home even if all the roads are destroyed”). With six on stage, the members of the Kalush Orchestra group, all of fighting age, benefited from a temporary dispensation issued by the government of kyiv, but they will have to return home to take up arms as soon as the competition is over. One of them stayed in the country.

“A member of the group joined the territorial defense of kyiv on the third day of the war”confided the singer Oleh Psiuk to AFP before the final on Saturday evening. “We are very worried for him, we hope to find him safe and sound when we return. »

The next edition in Ukraine?

The gala evening, followed each year by nearly 200 million viewers, was marked by several appeals in favor of Ukraine, in the face of the Russian invasion. At the end of the Ukrainian performance, much applauded by the 7,000 spectators gathered in Turin, the singer of the Kalush Orchestra group, Oleh Psiuk, launched to the crowd: “I ask to all of you, please help Ukraine, Mariupol, help Azovstal right now!” » (I ask all of you, please help Ukraine, Mariupol, help Azovstal [l’usine qui sert de dernière poche de résistance face aux forces russes à Marioupol] now !). Words which, on paper, constitute a departure from the apoliticism advocated by Eurovision.

“We understand the deep feelings around Ukraine in this context and consider the comments of the Kalush Orchestra and other artists expressing their support for the Ukrainian people to be more humanitarian than political in nature”, said the European Broadcasting Union (EBU), organizer of the event. The EBU had excluded Russia from the competition the day after Russian troops entered Ukraine on February 24.

Read also: Article reserved for our subscribers Eurovision: under the kitsch, the rhinestones and the sequins, the weight of geopolitics

Ukraine received the maximum score – 12 points – from several former republics or satellite countries of the Soviet Union: Poland, the country in Europe that has hosted the largest number of Ukrainian refugees since the start of the war, Moldova , Latvia, Romania and Lithuania.

The next edition of the competition will therefore be held, at least in theory, in Ukraine, which will be in the words of Oleh Psiuk, “a new, integrated, developed and flourishing Ukraine”.

It is Ukraine’s second victory in this competition after that of 2016 – two years after the annexation of the Ukrainian peninsula of Crimea by Russia – with Jamala and the title 1944a song about the deportation of the Tatars by Stalin.