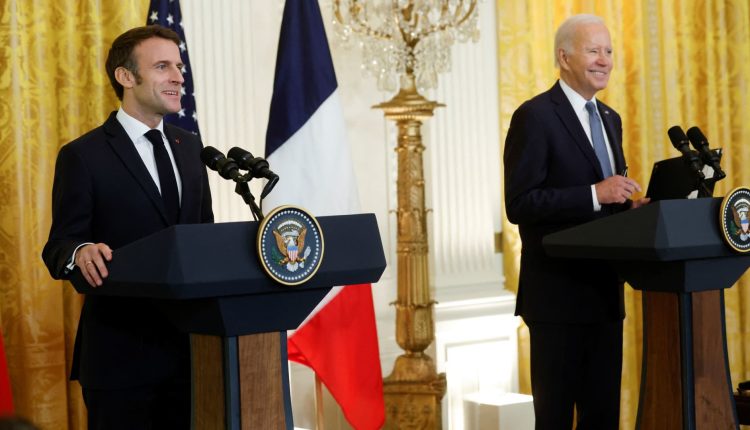 U.S. President Joe Biden and French President Emmanuel Macron stressed the importance of the nations’ alliance amid uncertainty in Europe over Russia’s invasion of Ukraine — even as France groused about some key elements of Biden’s Inflation Reduction Act.

The two leaders spoke to reporters in a joint press conference at the White House after meeting for more than two hours. Macron is visiting the U.S. as a guest of Biden for the first state dinner of his presidency. Ukraine was top of mind for the leaders who each worried about Russia’s bombing of civilian infrastructure as winter approaches.

“I think it’s absolutely critical, what Emmanuel said: we must support the Ukrainian people,” Biden said. “The idea that Putin is ever going to defeat Ukraine is beyond comprehension.”

“Having the U.S. strongly support the Ukrainians at this time is very important not just for the Ukrainians, but for the Europeans, who we are. This is why we do thank you for the solidarity, for the stability of our world today,” Macron said. “Because if we consider that we can abandon the country and abandon the full respect of its principles, it means there is no possible stability in this world.”

Despite the stated strong friendship between the two leaders, Macron ahead of the bilateral meeting had expressed frustration over how Biden’s signature legislative achievement, the Inflation Reduction Act, would affect Europe’s economy.

Macron criticized the law at a luncheon on Wednesday and in a speech at the French Embassy. European leaders, Macron said, worry the vast tax incentives would drive companies from Europe to the U.S. to create climate-friendly technology such as electric vehicles.

In the press briefing following their meeting, Macron said he felt his questions about the legislation had been sufficiently answered and he would return to Europe with a clear understanding of what steps needed to be taken.

“We are not here simply, really, to ask for proof of love. We are here, we came to agree on a strategy and clarify what was necessary to clarify and we did,” Macron said. “I’m going home confident as well as lucid as to what has to be done on the European side, which is a good thing.”

Macron said even if it was not Biden’s intention to harm allies with the legislation, the reality is it affects France. He said the two countries needed to “resynchonize” their policies to achieve the shared climate goals.

“We will work on the technical elements to make sure that there is no domino effect on the ongoing projects in Europe,” Macron said. “We want to succeed together, not one against the other.”

Biden said the two discussed “practical steps to coordinate and align our approaches” so the supply chain, manufacturing and innovation is strengthened “on both side of the Atlantic.” He added each leader asked their team to follow up on this.

Asked how he felt about his discussion with Macron and agreement on the tax credits, Biden simply said “I’m confident. That’s my answer.”

This isn’t the first time policies by the Biden administration have upset the French government. France briefly pulled its ambassador to the U.S. last fall after Biden negotiated a submarine deal with Australia without informing France. Biden at the time called the mishandled situation “clumsy” and the leaders agreed to repair their relationship after the diplomatic mishap.