Energy crisis.. Demonstrations in Germany and Moldova, and the opposition wins in the Czech Republic 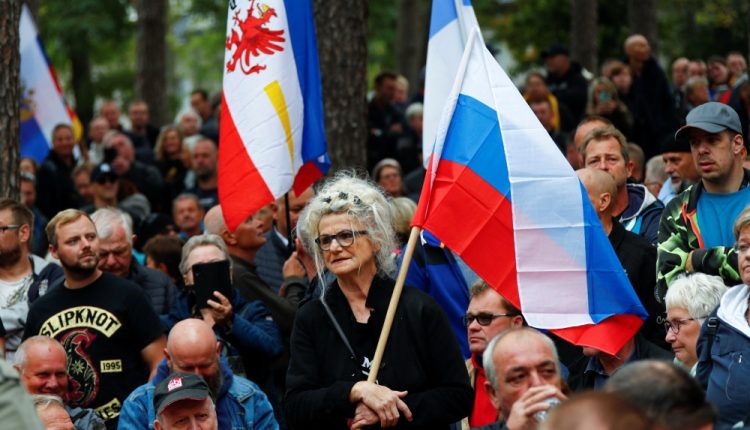 Ahead of the winter, which Europeans fear will come in light of a severe energy crisis, demonstrations took place in Germany and Moldova, while the main opposition group won in most major cities in the municipal elections in the Czech Republic, an expression of popular rejection of the government’s handling of the energy crisis. About 3,000 people today, Sunday, to open the German-Russian Nord Stream 2 line, with the aim of providing energy at reasonable prices,

A German police spokesman said: The march went peacefully until late in the afternoon.

It is noteworthy that Nord Stream 2 passes from Russia through the Baltic Sea to the German state of Mecklenburg-Vorpommern (in which Lubmin is located). The line was built, but the German government obstructed its operation after the Russian attack on Ukraine.

Russia stopped pumping gas to Germany via the parallel line Nord Stream 1, and attributed this to technical reasons, but the German government considers these reasons as pretexts on the part of Moscow.

In Chisinau, the capital of Moldova, several thousand protested today to demand the resignation of the pro-Western government, amid growing anger over high natural gas prices and inflation. The aftermath of the Ukraine war and the resulting energy crisis.

Thousands of people were seen protesting outside the official residence of the Moldovan president in central Chisinau, chanting slogans including “Down with (President) Maya Sandu” and “Down with the government.”

Sandow has repeatedly denounced Moscow’s “actions” in Ukraine and its bid to join the European Union, and critics say it should have negotiated a better gas deal with Russia, Moldova’s main supplier.

Protesters had set up about a dozen tents outside her residence by noon, following an attempt to set up a protest camp outside the country’s parliament last week.

In the Czech Republic, the main opposition group in most major cities won the weekend’s municipal elections, mobilizing votes against the government’s handling of the energy crisis.

The Ano party, which means yes in the Czech language, led by billionaire Andrej Babis, topped the list in eight out of 13 regional centers, while it lost to government parties in the capital, Prague, and in Brno, the second largest city, according to the results of the two-day poll that ended on Saturday. , according to Bloomberg News.

Bloomberg reported that the worst cost-of-living crisis in the Czech Republic in three decades was fueling resentment among the population. The opposition, including the far-right Social Democrats, is gaining popularity by criticizing the government for failing to do enough to help people and businesses deal with rising energy bills.

One of the main issues in the election campaign was the rise in energy prices, which rose again as a result of the Ukraine war.

In early September, about 70,000 people took to the streets in Prague to protest against the government.