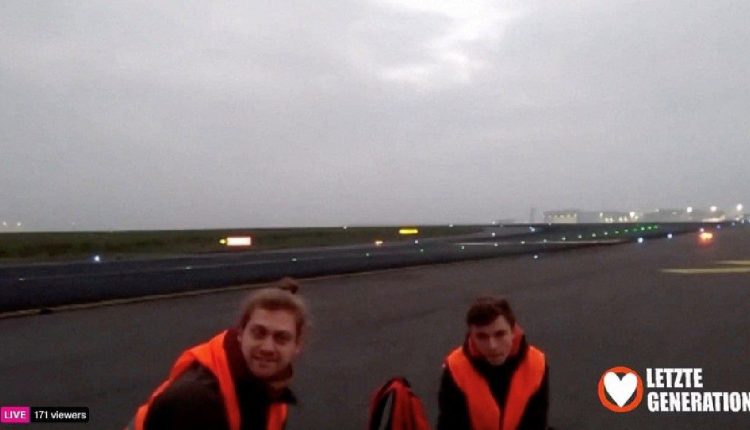 Activists in Germany broke into the Berlin Brandenburg Airport on Thursday and glued themselves to the tarmac in protest of government inaction on climate change.

The activists were members of the climate activism group Letzte Generation (Last Generation) and stated that the stunt was staged in protest of greenhouse gas emissions caused by air travel.

“One affluent percent of the population is responsible for around half of flight-related greenhouse gas emissions,” Last Generation said in a public statement.

CLIMATE ACTIVISTS FAIL TO GLUE THEMSELVES TO ‘THE SCREAM’ PAINTING IN NORWAY: ‘I SCREAM FOR PEOPLE DYING’

The protestors additionally urged the German government to invest in travel by rail.

Climate change activists glue themselves to the road during a protest in Cologne, Germany, Nov. 24, 2022.
(Letzte Generation/Handout via REUTERS )

Members of climate change activism group Last Generation glue themselves to the tarmac at an airport in Berlin, Germany.
(Last Generation/Reuters)

A spokesperson for the airport said that the group, which included a 70-year-old man, gained unauthorized entrance via two separate points in the tarmac’s parameter.

Approximately 13 flights were forced to divert course or change their route.

Protesters have also poured onto freeways to stop traffic in the name of cutting fossil fuel use and poured out milk onto the floors of stores to fight for environmental justice.

Climate-change activists from ‘Ultima Generazione, or Last Generation, turned to Andy Warhol’s Painted BMW in Milan on Friday, covering it with flour.
(Reuters)

On Oct. 23, activists from Last Generation hurled mashed potatoes at a $110 million Monet painting which was in a Potsdam museum.

The group said that they threw mashed potatoes at the painting to raise awareness about the dangers of fossil fuels.

Hamdan bin Mohammed: The sacrifices of the martyrs are a precious national legacy…

Mohammed bin Rashid orders the release of 1,040 inmates on the occasion of the 51st…

Maktoum bin Mohammed: Our martyrs are a role model of loyalty and belonging

The President of the State orders the release of 1,530 inmates in correctional and…