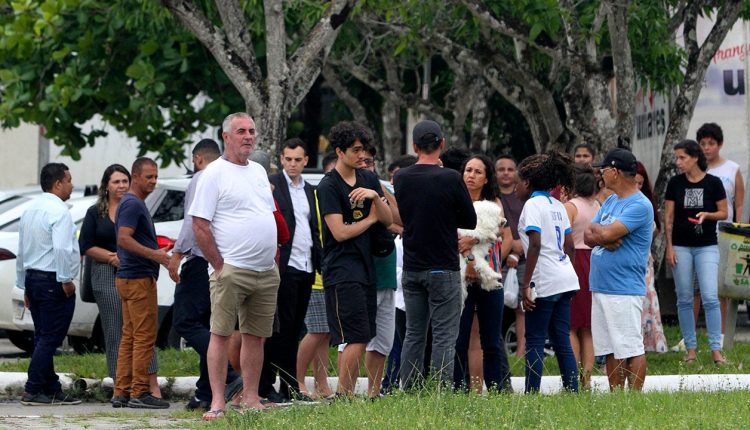 Brazilian police said the 16-year-old suspect who allegedly killed four people and wounded 12 others in shootings at two schools in the southeastern part of the country wore a swastika pinned to his vest.

The unidentified teen suspect, wielding a semiautomatic pistol and a revolver, allegedly carried out the attacks on Friday at a public school with elementary and middle school students and a private school, both located on the same street in the small town of Aracruz in Espirito Santo state.

Three teachers and a student were killed. Five of the wounded remained in the hospital.

The suspect, identified as a 16-year-old boy who used to study at the public school, was arrested by police about four hours later, Espirito Santo Gov. Renato Casagrande said.

Police officers stand at the entrance of the Primo Bitti State School, one of two schools where a shooting took place, after an armed suspect opened fire, in Aracruz, Espirito Santo State, Brazil, on November 25, 2022.
(KADIJA FERNANDES/AFP via Getty Images)

Authorities did not release the suspect’s name but did say the teenager used his family’s car to go from one school to the other and had the license plate hidden by a cloth. Security camera footage showed him wearing a bulletproof vest, according to Espirito Santo public security secretary Márcio Celante.

The shooter allegedly gained access to the teachers’ lounge in the public school after breaking a lock.

Casagrande said the semiautomatic weapon belonged to the military police, while the revolver was a personal weapon registered in the name of the former student’s father, a military police officer.

Relatives of pupils stand at the entrance of the Praia de Coqueiral Educational Centre, one of two schools where a shooting took place, after an armed suspect opened fire, in Aracruz, Espirito Santo State, Brazil, on November 25, 2022.
(KADIJA FERNANDES/AFP via Getty Images)

The accused shooter is being held at a facility for underaged criminals.

Police say investigations are still preliminary and that they cannot jump to any conclusions about the motives for Friday’s shootings. They did say the 16-year-old alleged attacker was wearing a military-style clothing and a swastika, according to The Associated Press.

The suspect’s family said he has received psychiatric treatment, which the school had not been told about.

“This shows how the violence culture is a reality for some people, especially young people. This is a mental health issue which society has to deal with nowadays,” Casagrande said.

The shootings come at a time of unrest in the country as incumbent President Jair Bolsonaro has refused to accept narrow defeat in October’s election and protests have carried on in several states for weeks.

Bolsonaro has been a vocal supporter of gun rights.

President of Brazil Jair Bolsonaro arrives for a press conference two days after a narrow defeat by Lula da Silva in the presidential runoff at Alvorada Palace on November 1, 2022 in Brasilia, Brazil. Bolsonaro didn’t acknowledge his defeat and asked supporters to peacefully protest but allow free transit through the country.
(Andressa Anholete/Getty Images)

According to the AP, in the beginning of this year a far-right influencer and Bolsonaro supporter said in a podcast that a Nazi party should be created in Brazil, in order to have freedom of speech.

At the time, the president condemned the influencer’s comments and compared Nazism to Communism.

In 2021, however, Bolsonaro hosted in his office and posed for pictures with German lawmaker Beatrix von Storch, a granddaughter of one of Hitler’s ministers.

Danielle Wallace is a reporter for Fox News Digital covering politics, crime, police and more. Story tips can be sent to [email protected] and on Twitter: @danimwallace.