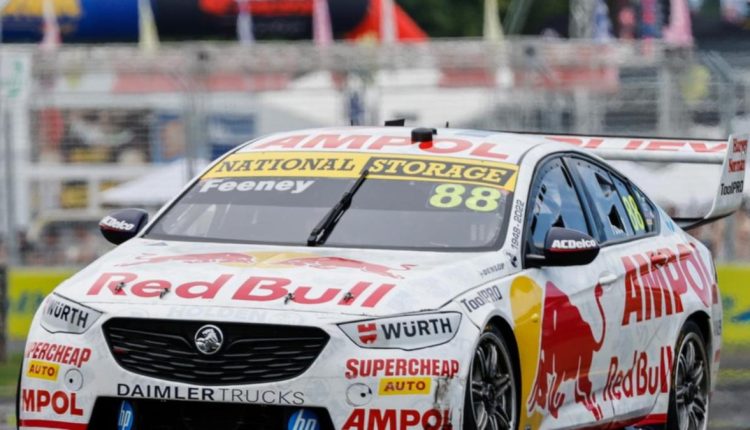 Rising star Broc Feeney has pulled off a memorable maiden Supercars win to give Holden fans a joyous farewell to the red lion at the Adelaide 500.

Feeney, who stepped into Jamie Whincup’s Red Bull Ampol seat this season after the Supercars immortal’s retirement, saved his best drive of the year for last.

WATCH THE VIDEO ABOVE: Jimmy Fallon’s ‘insane’ hot lap in a V8 Supercar.

The 20-year-old backs up Chaz Mostert’s win in Saturday’s 78-lap race to make it a Holden double in the iconic manufacturer’s last motorsport event.

Feeney held his nerve despite relentless pressure on his tail from two-time Bathurst 1000 winner Chaz Mostert but was able to convert the slender lead he held for more than 50 laps.

He becomes the second-youngest driver to ever win a Supercars race, only behind three-time champion Scott McLaughlin.

“I can’t believe it,” an emotional Feeney said.

“I felt like the win was always so close and to get it at the last race, in front of all these fans for Holden, it means so much.

“In that race I was out to show that hopefully next year I can be a contender.

“I had a wicked car … it’s just probably the best moment of my life.”

However, van Gisbergen was slapped with a pit-lane penalty following an incident after a safety-car restart.

General Motors retired the Holden brand in 2020, announcing it just weeks before the COVID-19 pandemic began, but the Commodore has lived on in motor racing.

However, with Gen3 cars ready to launch next year, Chevrolet Camaros will replace Holdens on the grid to battle the Ford Mustangs.

Holden bows out as the most successful manufacturer in Supercars history with 616 race wins.

It was a frustrating end to a dominant season for van Gisbergen, who won a record 21 out of 34 races, including his second Bathurst 1000 title with Garth Tander.

But van Gisbergen put his disappointment to aside, immediately celebrating on track with an epic burnout session around his third Supercars championship trophy.

The revival of the Adelaide 500 turned out to be a roaring success, with 258,200 spectators entering the Parklands complex for the four-day event.

The crowd number was well up on the previous Adelaide event in February 2020 when 206,350 fans attended.