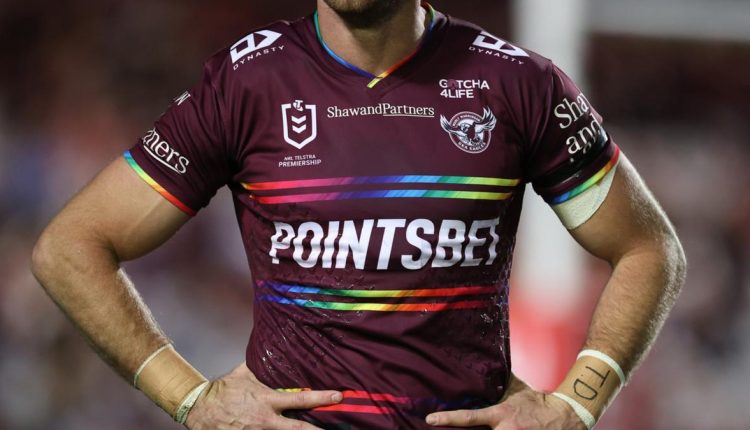 The NRL will keep the door open for introducing a Pride Round into next season’s draw, with the issue to be discussed at upcoming Commission meetings.

The draw for 2023 could be revealed as soon as this week, as the league work around a myriad of stadium challenges and introduction of a 17th team.

When it is released there will be no dedicated Pride or Inclusion Round, after the topic was first floated during Manly’s rainbow jersey fiasco in July.

But that does not mean it won’t eventually be added, with the topic still on the agenda.

“We were always going to look at those things in the off-season.

“We have plenty of time, we have 26 rounds and we don’t start for three or four months.

“That will be discussed at the next couple of Commission meetings. There has been discussion, but no final decisions made.”

The NRL is well aware of the minefield around the issue.

Manly’s rainbow jersey last year caused days of headlines and destroyed their season as seven players stood down and refused to wear it.

Head office also received torrents of abuse from some, amid claims the game was becoming too political.

At the same time, the league has previously taken stances on the Yes vote in 2017, with signs of support for marriage equality as Macklemore performed Same Love at the grand final.

“From our end we have always said we want to respect everyone’s views,” V’landys said.

“We don’t want to get into politics. The reason people watch rugby league is to escape, they don’t watch it because you have a political persuasion.

“We want to keep it as much as an escapism sport as possible.

“But respecting each other, I don’t think that’s political.”

If the NRL do go ahead with a Pride Round, there is also the risk that the issues Manly faced will be experienced across most clubs.

Josh Aloiai, one of the players to sit out the Sea Eagles’ game against the Sydney Roosters, made clear last month he would not wear a pride jersey next year.

Other clubs have also expressed fears to AAP that some of their players would boycott.

But the likes of Trent Robinson at the Roosters and Manly owner Scott Penn have backed the idea, with Pride Rounds played in other sports.

“There are ways you can do it where you don’t upset anyone,” V’landys said.

“If we do it, we have format to do it the right way. It’s all about respecting each other.

“We have to respect that (some people) have a different view to the rest of us.

“The most important thing in my eyes is we’re all equal, it doesn’t matter what colour, what creed or sexual orientation.”

Kangaroos star hits out at NRL over CBA negotiations: ‘They are lowballing us’