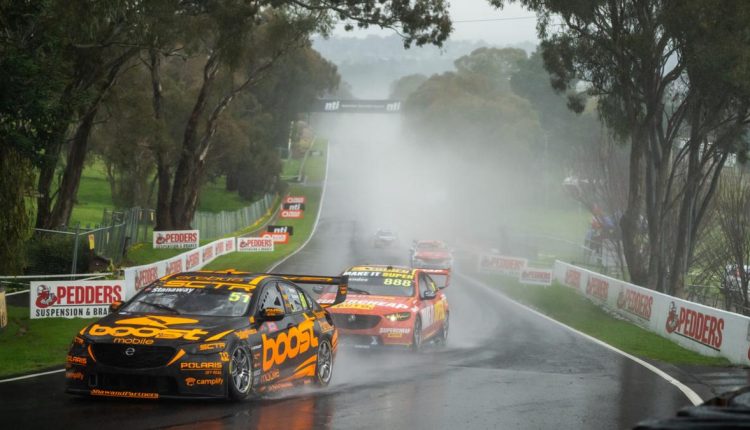 Campers at the Bathurst 1000 are bracing for muddy, stormy and potentially dangerous conditions as a large rain band crosses central and eastern NSW.

A trough and cold front moved across the state on Friday, bringing further widespread rain to the eastern half of NSW, including the western slopes and ranges, central NSW and the south coast.

WATCH THE VIDEO ABOVE: Brown makes heavy contact with the fence

The weather bureau has placed many eastern catchments on flood watch, including Hunter and the Greater Sydney regions, as it waits to see exactly where the most intense rainfall occurs.

“Behind the rain band, there is a lot of convection which means we’re getting some really decent thunderstorms,” a bureau spokesperson said on Friday.

Up to 100mm of rain could fall at motorsport mecca Mount Panorama over the weekend, potentially leading to flooding along the Macquarie River in Bathurst.

Severe thunderstorms could also bring damaging winds to the region.

Free sandbags will be available in Bathurst while volunteers are checking in with residents and tourists camping near the Macquarie River.

Deputy Premier Paul Toole urged campers on the mountain and elsewhere to stay away from trees and riverbanks.

Meanwhile, the priority car park at the Bathurst 1000 closed on Friday to all but four-wheel-drives, and those in the muddy general carpark were asked to have “appropriate footwear”.

“A further update will be provided for Saturday and Sunday parking dependent on the weather conditions,” organisers said.

Saturday is set to be a high-risk day for Sydney, with warnings of renewed river flooding to the city’s west, months after record peaks were observed.

The SES has warned people near Penrith to stay informed about predicted river rises in the Nepean, Hawkesbury and their tributaries.

“We’re very conscious your communities have experienced four floods within an 18-month period and acknowledge the anxiety you will be feeling at this time,” Emergency Services Minister Steph Cooke said on Friday.

Conditions will ease briefly on Saturday morning before a low-pressure system forms along the coast in the afternoon, bringing renewed rain in the evening.

Rain could continue in eastern parts of the state into Monday, the bureau warns. Statewide, the SES received 365 calls for assistance in the 24 hours to Friday morning, including four for flood rescues.

Cotton town Warren, where waters have been above the major flood level since Monday, is subject to one of more than a dozen watch-and-act flood alerts in NSW.

“It wasn’t very long ago we had a five-year-old boy … who was killed in a car that was washed off a bridge,” NSW Police superintendent Bob Noble said, referring to an incident in Tullamore two weeks ago.

“You can imagine how devastating that is for that family. It’s a terribly hard way to learn a lesson for society.”

Even with a deluge on the radar, that didn’t stop swathes of fans from descending on the circuit for Australia’s great race on Friday.

Seven thousand campsite tickets sold out for Bathurst in less than a day this year and the circuit is abuzz with fans and follows on to local pubs around town at night.

Everything you need to know about the Bathurst 1000 on Seven