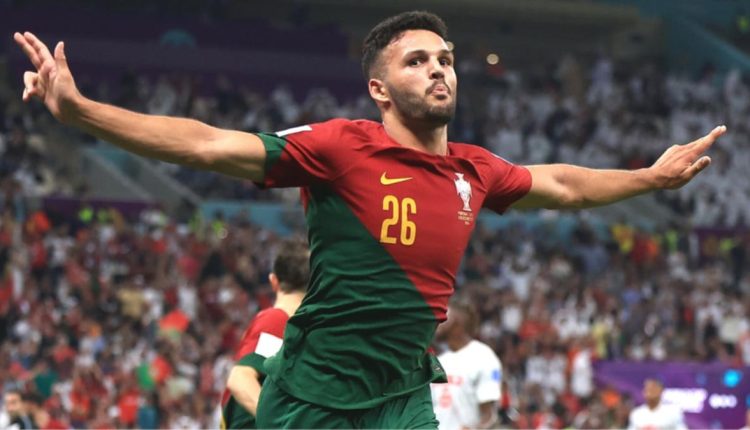 Fernando Santos’s bold decision to bench Portuguese legend Cristiano Ronaldo for the first time in his past 18 World Cup matches has been justified.

And Gancola Ramos repaid the faith shown in him to fill the boots of the five-time Ballon d’Or winner with a “delicious” hat-trick in what proved to be a coaching masterstroke.

Ronaldo has scored goals in the past five World Cups, but never in the knockout stages of a tournament.

It took Ramos just 17 minutes to eclipse him, and he did it with an “impossible” goal.

With a thundering left-foot rocket, Ramos found the marginal gap between Swiss keeper Yann Sommer and the top-left corner to open scoring in the round of 16 clash.

“It seemed impossible to squeeze one in from there,” commentator Alan Smith said of the strike.

Ramos had only featured for 10 minutes in total in Portugal’s World Cup group matches but earned a surprise start when Santos opted to leave the country’s all-time top-scorer Ronaldo on the bench and take a risk with the youngster.

In fact, the youngster had played just 33 minutes of international football until Wednesday morning’s contest (AEDT), but with just his fourth touch of the match, he scored the first of three personal, and six team goals.

The result of Santos’s brave move was a far more fluid attack than in the previous games, with Joao Felix and Bruno Fernandes playing more freely than usual.

While for years every Portuguese attacking move was all but destined to end up with Ronaldo, now the frontline was far more unpredictable.

Portugal thrashed Switzerland 6-1 to storm into the quarter-finals of the World Cup for the first time since 2006, setting up a last-eight clash with Morocco, who stunned Spain in a penalty shootout earlier on Tuesday.

Ramos scored his second, and Portugal’s third, six minutes after the break by getting onto the end of Diogo Dalot’s low cross and he completed his hat-trick in the 67th with a delicate dinked finish.

Commentator Peter Drury was in awe of the youngster.

“Delicious hat-trick! Dream the dream, why don’t you?” Dreary said.

Pepe had doubled Portugal’s lead with a powerful header from a Bruno Fernandes corner after 33 minutes and Raphael Guerreiro rifled in their fourth in the 55th. Substitute Rafael Leao completed the rout in added time with a curled right-foot finish.

Manuel Akanji scored a consolation goal for the Swiss from a corner just before the hour.

While thousands of fans at Lusail Stadium repeatedly chanted ‘Ronaldo’ ‘Ronaldo’, hoping to see the superstar in action, Ramos became the first player to score a hat-trick in his first World Cup start since Germany’s Miroslav Klose 20 years ago.

Only when the game was already in the bag did Ronaldo come on as a late substitute and earned the loudest cheers of the night.

But by then a new Portugal hero, no longer the sorcerer’s apprentice, had stolen the show with a memorable performance.

Ronaldo had one chance which he slammed into the back of the net, but was clearly off-side and the goal was not counted.