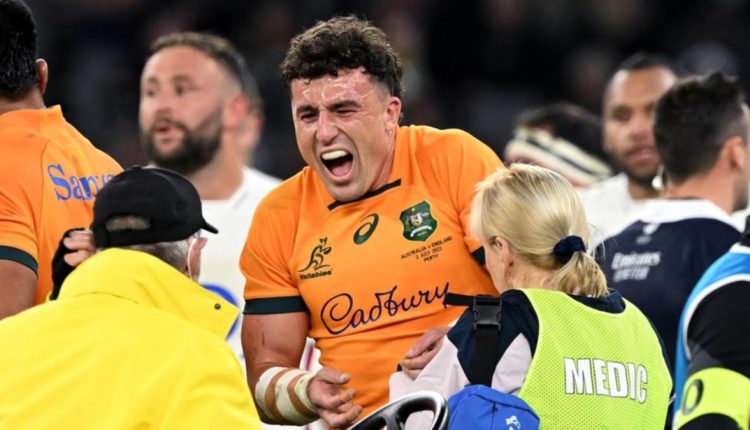 Wallabies fullback Tom Banks has suffered a serious arm injury during the first Test against England in Perth.

Quade Cooper was a last-minute withdrawal after straining his left calf in the warm-up, but it was the injury to Banks that left viewers squeamish.

After leaping high into the air in a bid to catch Nic White’s 22nd-minute restart, Banks’ left arm bent the wrong way as he crashed to the ground and attempted to avoid a head-first landing.

The 28-year-old immediately realised the extent of the damage, and a medicab was called to take him off the field.

Adding to the Wallabies’ woes, prop Allan Ala’alatoa went off in the 26th minute for a concussion test after copping a knock while tackling England fullback Freddie Steward.

The night of injury carnage for the Wallabies started even before kick-off.

The Wallabies were completing their warm-up at Optus Stadium when Cooper injured his left calf.

Cooper was consoled by teammates as he slowly trudged off the field.

Noah Lolesio was thrust into the starting line-up in place of Cooper at No.10 while James O’Connor was brought onto the bench.

Cooper led the Wallabies to five straight wins last year after his four-year exile from the national side came to an end and his absence leaves a massive void.

O’Connor was part of a corporate function before the match but he was rushed to the rooms to get changed once Cooper’s injury was confirmed.

Earlier in the week, Wallabies coach Dave Rennie explained his reasons for not including O’Connor in the side.

“James missed a big chunk and didn’t play too many Kiwi games and had two different injuries,” Rennie said.

“And whilst he’s back and fit and available he just lacks sharpness around the skill set.

“Noah’s played very well and we have a lot of confidence and he’s trained very well.”