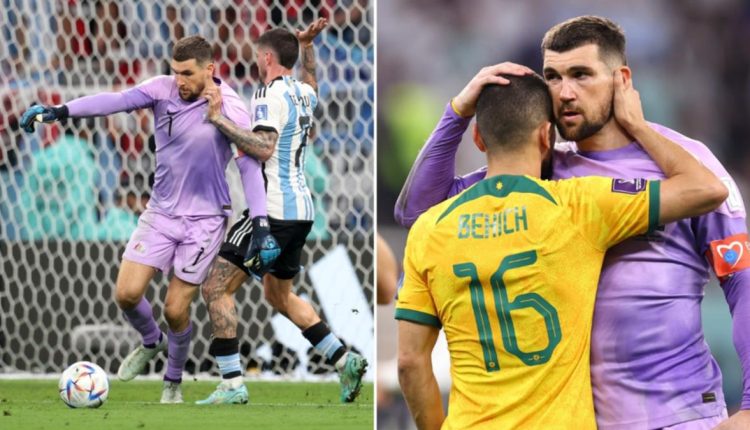 The Socceroos have been eliminated from the World Cup after goalkeeper Mat Ryan’s ultimate brain fade conceded a crucial second goal against Argentina.

Lionel Messi had opened the scoring with a well-worked goal in the first half but Argentina doubled their lead in far more opportunistic circumstances just before the hour mark.

WATCH IN THE VIDEO ABOVE: Mat Ryan coughs up the ball to send Argentina 2-0 up.

The Socceroos were attempting to play out from the back when Kye Rowles passed back to Ryan, who took an ill-fated touch as Argentina pressed into the penalty area.

Julian Alvarez pounced, tapping into an empty net as nearby defenders watched on helplessly.

“Argentina have had very little opportunities and we’ve gifted them a goal. Decision-making there from Maty Ryan, should’ve let the ball go. Tries to dribble the ball out with it, been pick-pocketed and punished yet again.”

Australia coach Graham Arnold said he was proud of the team but rued the game-changing error: “The first (Argentina) goal was quality but in the end the mistake cost us.”

UPDATE: Mat Ryan takes blame but regrets not milking a foul during blunder.

Ryan was backed in to captain the Socceroos at the World Cup despite playing precious little club football in recent months, with Australia’s form goalkeeper Mitch Langerak left out of the squad.

But the skipper had been impressive in the group stage to keep two clean sheets.

“Everyone makes mistakes and you’ve got to learn from it, get over it and move forward. I’m sure that Maty will.”

MATCH CENTRE: All the stats and minute-by-minute commentary from the Socceroos’ 2-1 defeat to Argentina.

The Socceroos pegged it back to 2-1 when Craig Goodwin’s long-range blast took a wicked deflection, rattling Argentina as the pressure built.

Three minutes later Australia’s bundle of energy Aziz Behich went on a daring run, tearing through Argentina’s defence and, as his eyes lit up when five metres from folklore, his shot was blocked.

The best opportunity to level the scores came when Garang Kuol – the youngest player to appear in a World Cup knockout game since Pele in 1958 – had a shot saved in stoppage time.

Aussie great Mark Bosnich described the Socceroos’ performance as “the most courageous” in the team’s history.

Leading midfielder Jackson Irvine, who would have missed the quarter-final after picking up a yellow card against Argentina, choked back tears in his post-match interview.

“We gave it everything just like we have every minute of this competition. I’m so proud of all the players, all the staff,” he said.

“But just not enough on the day … I think we did everything we could have. We set up to be compact and disciplined in our shape. We were excellent defensively, we gave up very little until the end, you have to have a go with the last 15 minutes.

“We did everything we could to give ourselves a chance in the game. When Argentina are celebrating like this after a victory against Australia I think it shows what kind of opposition we gave them today.

“I hope we made everyone proud.”

Earlier, Messi had put to bed the barely believable stat that he had never scored in a World Cup knockout match.

WATCH IN THE VIDEO BELOW: Lionel Messi surpasses Maradona feat with opening goal.

The 35-year-old took a free kick near the corner flag but would score with a low shot when Argentina followed up the set piece with a sweet move into the box.

Messi has now surpassed Diego Maradona for World Cup goals, nine to the Argentina icon’s eight, and sits one behind the nation’s all-time leader Gabriel Batistuta.

He had been well held by Australia’s Keanu Baccus in particular during the first half but was typically brilliant in freeing himself to find space for the goal.

Argentina will face the Netherlands on Thursday (Friday 6am AEDT) for a spot in the quarter-finals.

The Socceroos, meanwhile, leave Qatar having achieved their best ever result at a World Cup, winning two matches for the first time.

But just as the golden generation did in 2006, they depart at the round-of-16 phase.

Socceroo chokes back tears after World Cup exit: ‘I hope we made everyone proud’