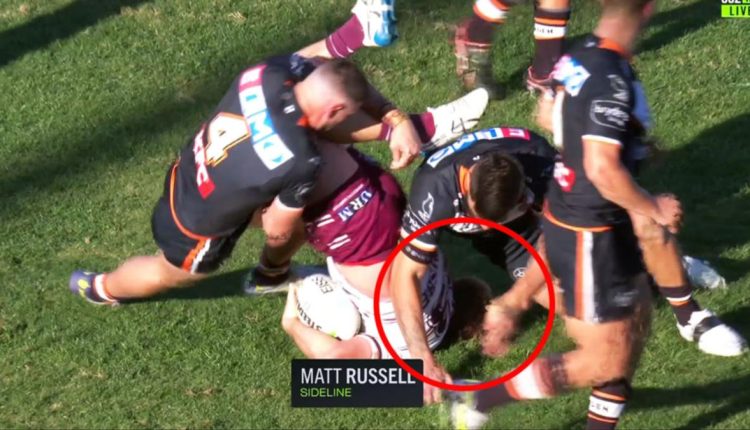 Wests Tigers centre Brent Naden is expected to cop a five-week ban after he was sent off for a “horrible” spear tackle on Manly’s Jake Trbojevic on Sunday.

Naden dumped the Sea Eagles lock down directly on his head in the 65th minute tackle, which rivals an effort from Manly’s Karl Lawton as the most dangerous tackle of this NRL season.

You can watch the incident in the video above

The former Panthers back, who joined the Tigers as a mid-season recruit from the Bulldogs this year, picked up a slice of unwanted history as he was sent from the field by referee Peter Gough.

He became the first Tigers player to be sent off in 20 years, and just the third player at any club to be sent off for a dangerous throw this century.

The news kept getting worse for Naden on Monday as he was hit with a grade three dangerous throw charge, which could result in a five-week ban.

He will receive a four-week ban if he enters an early guilty plea – the same suspension Lawton received for a similar tackle on Souths captain Cameron Murray earlier this year.

While Naden quickly checked on Trbojevic’s welfare after the tackle, his dangerous tackle was condemned by the commentators.

“That tackle got away from Naden… he checks on the welfare of Jack Trbojevic. That’s horrible,” Fox League’s Brenton Speed said.

Co-commentator Michael Ennis said Naden should be facing an eight-week ban for the tackle.

“It was as bad a spear tackle as we’ve seen in a long time.

“No player goes out there to do that but the fact is he lands on his head and it could have been a really, really bad outcome for Jake Trbojevic.

“I think he’ll get a suspension around eight weeks, I really do.”

Meanwhile, Jake Trbojevic himself showed why he’s considered the nicest man in rugby league as he defended his opponent.

“I was all good,” Trbojevic insisted after the match.

“He was very apologetic. Just momentum of me trying to find the ground anyway. He was a bit unlucky.

“It didn’t hurt at all. There was no malice in it.”

The send off capped a nightmare day for Naden, who bombed a try, needed a HIA after being flattened by Haumole Olakau’atu and missed tackles in the lead up to two Sea Eagles tries.

Naden only arrived at the Tigers last month to help fill a shortage in the outside backs, with Junior Tupou or Asu Kepaoa the men most likely to fill his spot.

‘Come down here and say it’: Kyrgios rages at fan’s ugly four-word slur