Theresa’s family thought she was a forgetful mum. Instead she was suffering from a ‘hidden disability’ 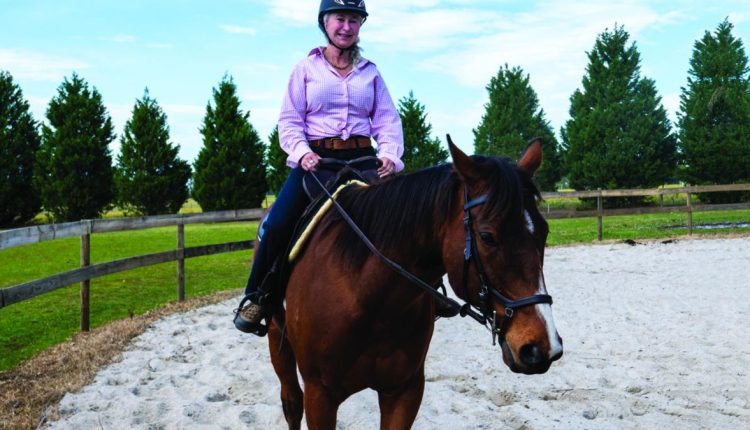 A little more than 10 years ago, mother-of-five Theresa Flavin began having trouble with the simple tasks she usually did on a daily basis.

Compiling an email distribution list, remembering names, organising her work – all the easy things she normally did without a second thought, she was now struggling with.

It became apparent something was wrong. So Theresa, who was then working at a government-run regulatory body, sought help from a doctor.

They told her it was probably menopause or depression – things common in middle-aged women.

But tests for menopause came back negative – and Theresa knew she wasn’t depressed.

Then a trusted doctor sent her to a neuropsychologist, and when those the tests came back, it was apparent what was causing Theresa’s issues – and made more sense as to why doctors had not picked it up.

Theresa, then in her mid-40s, was diagnosed with younger onset dementia.

“I hadn’t … thought about dementia in a younger person,” she said. “I wasn’t even aware it was a thing.”

“It certainly wasn’t on (the doctors’) radar.

“Like the rest of us, that’s not on your spectrum. So yes, it was a shock.”

And Theresa is not alone.

Between 386,200 and 472,000 Australians had dementia in 2021 – and that figure is expected to double by 2058, according to the Australian Institute of Health and Welfare’s (AIHW) report Dementia in Australia, published earlier this month.

Dementia is an umbrella term for a large number of conditions that affect the function of your brain, including Alzheimer’s disease, vascular dementia, Lewy Body disease and frontotemporal dementia.

And while dementia typically affects those over 65, about 27,800 Australians under 65 are living with younger onset dementia – a number that is expected to increase to 39,000 by 2050, according to the AIWH report.

For years, Theresa’s undiagnosed dementia had caused difficulty in the family.

Over the years, it started to look like she didn’t care about her loved ones. She’d accidently forget things like birthdays, or not show up to parent-teacher meetings.

“You start dropping the ball with your family, and that makes for a lot of trouble,” she said.

“Over the years (it) started to look like I didn’t care because this was going on a couple of years before I was diagnosed.

“So that creates a bit of a rift in a family because you know, I wasn’t reaching out anymore. I wasn’t calling.”

When she came to her family with a diagnosis, many couldn’t see past the fact that she was so young – she didn’t look like someone who typically has dementia.

“It just didn’t make sense to them because I wasn’t the picture of what they had in their mind of their granny with dementia, who is very old and forgot different sorts of things,” Theresa said.

According to Dementia Australia, anyone can be diagnosed with the disease, and it usually depends on a variety of factors such as age, genes, health and lifestyle.

Dementia can be defined by two sets of criteria – cognitive decline and interference with day-to-day functions, according to Professor Henry Brodarty, who is the Dementia Australia honorary medical advisor and co-director of the Centre for Healthy Brain Ageing at the University of New South Wales.

“It can be interfering with things as basic as dressing or washing but usually in the early stages it’s more … like managing your finances, or cooking or shopping or work performance,” he said.

Frontotemporal dementia is more commonly diagnosed in people under 65. It’s characterised by progressive damage to either or both the frontal or temporal lobes of the brain, and memory often remains unaffected.

“Memory is pretty well preserved but behaviour and language … is much more affected,” Brodarty said.

But even after the diagnosis, it took a while for Theresa’s family to accept that her behaviour of the past was because of this hidden disease.

“It wasn’t immediately ‘Oh well, that’s okay then’. Our hearts don’t work like that.”

Even now, Theresa still thinks her family is trying to process her diagnosis.

Despite her workplace being extremely supportive, it became apparent to Theresa that working was no longer going to be a viable option.

It wasn’t safe enough to commute into the city on a daily basis. It was too difficult for her to navigate the trains and the streets on her own.

Day-to-day, Theresa now chooses to stay inside her western Sydney home for the most part – it’s where she feels the safest.

“Going out into the community is hard because it’s like the hidden disability,” she said.

“When I get to Kmart, I can’t find the checkout. It’s just like going into the Amazon for me.

“So day to day things like shopping and going out and going to places where there are a lot of people, I can’t function. There’s too much sensory and I just freeze.”

Thankfully, Theresa is young enough to receive NDIS support, meaning support workers are available to help with the tasks that are increasingly difficult for her – even ones that are mundane and simple to many.

One thing looming over Theresa’s head is the thought of one day having to be placed in aged care when her condition worsens.

For many with dementia which has progressed to the end stages, Theresa said it’s like being in a coma, where you lose the ability to properly express what you’re thinking and feeling.

This concerns Theresa, particularly after the Royal Commission into Aged Care Quality and Safety’s final report stated there were 851 reports of sexual assault in 2019–20.

“That frightened me, how vulnerable I’m going to be when I’m sitting in aged care at age 60. You know, anything can happen to me if I can’t talk about it.”

To Theresa, being placed in aged care is akin to being put in a prison.

She says it is especially detrimental for people diagnosed with dementia.

“The only thing that really slows the progression that I’ve seen in my experience is connection with people, and when you’re moved out of your home, you’re just disconnected,” she said.

“There are many, many times when staying at home is not possible … but (aged care) will and does have a massive impact on your disease trajectory.”

Stuck in a place full of people who have the same disease as you, yet may be further along in their progression, can also be quite confronting for people with younger onset dementia.

“If the person … can’t be managed at home and needs to go to residential care, it’s completely out of kilter for them,” Brodarty said.

“They don’t have any soulmates there because everyone is 20 or 30 years older.”

Getting on with life

Despite her struggles and worries about what lies ahead, Theresa has managed to keep a positive disposition, and now dedicates a lot of her time to doing advocacy work for Dementia Australia.

It’s something she is deeply passionate about, and it also helps to keep her mind ticking – potentially helping to slow the progression of her dementia.

“I would say that combination of having my family connections, having a passion and that intellectual stimulation, being forced to read and forced to talk … is definitely keeping me well for longer.”

She enjoys life on her semi-rural property, where she is free to roam the property, tend to her garden and ride her therapy horse Red.

“He’s like one of the biggest horses in Australia but he’ll come and tickle my cheek with his whiskers, so even when there’s no one around, I have something to connect with,” Theresa said.

“I can’t describe the therapeutic value.”

Theresa has learnt to cope with the often demoralising and judgmental outside world in her own way.

She’s sought comfort in how other cultures think about dementia and how they treat those with the condition.

“I was speaking at the International Dementia Conference at the weekend, and they had a researcher that was speaking about Indigenous and First Nations peoples’ view on dementia … it’s seen as the natural cycle of, you get to a point in your life when you’re transitioning to what they would call the afterlife,” Theresa said.

“So you’re in two worlds at once.”

Theresa is now in the transition phase of her life.

At some point her two worlds will merge, but in the end it’s just the same natural passage that everyone will have to make eventually.

“Giving myself that viewpoint of this is a transition and I just might take longer with mine than some people … I’m able to breathe now because it doesn’t feel like I’m soiled or damaged,” she said.

“I’ve just chosen to take this view that this is a process, and it’s mine.”

Dementia Australia’s ‘Dementia Action Week’ is running until Sunday September 25, with the theme ‘a little support makes a big difference’. The campaign aims to raise awareness within the wider community about discrimination towards people living with dementia, their families and carers. Visit Dementia Australia’s website for more information.