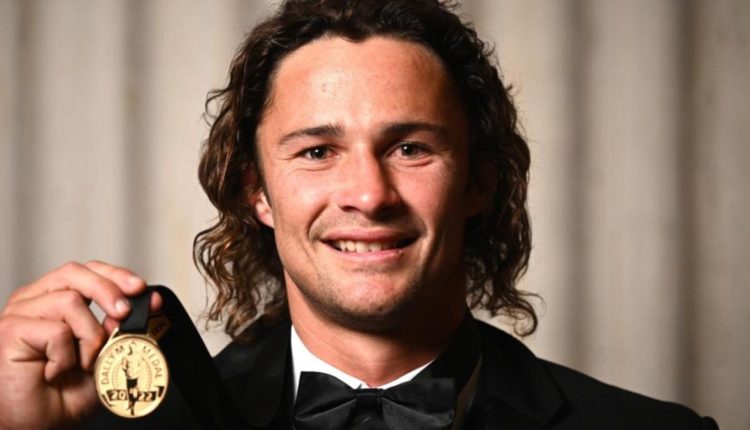 Nicho Hynes has explained how the decision to employ a mindset coach helped turn Craig Fitzgibbon’s pre-season prediction of a Dally M into reality.

A Cronulla recruit playing his first full season as a starting player, Hynes would have been considered a long shot to claim the medal at the start of the season.

But the halfback revealed the medal came after first-year coach Craig Fitzgibbon challenged him to go after it in their opening meeting.

“I went to his coach’s office when I first arrived at the club and he literally sat there and said, ‘Nicho why can’t you be the best player in this competition?’,” Hynes recalled.

“I walked out of that room and I just went: ‘Man, this guy’s crazy. This is my first year. I can’t be the best player in this competition’.

“But then I got home, told my mindset coach about it and he just said: ‘Why?’.

“It punched me in the face really. I didn’t really have an answer. I sat there and wrote down some goals and thought, well, why can’t I be?”

Hynes made the call to meet with mindset coach Jarred Brown three times each week, deciding it would be crucial on his move to Cronulla.

“It made me go into every game with no weight on my shoulders, no outside noise, no stress, no worry,” Hynes said.

“I’ve been someone who’s been an over-thinker in my past. Worried about pressure, worries outside noise.

“Coming to Sydney, I knew that there would have been a hell of a lot of that with the media and social media.”

Hynes’ crowning glory, aged 26, is also just reward for the way he has had to fight for his career.

Let go by Manly after under-20s, Hynes moved north to Mackay in the hope of being signed by North Queensland, but without success.

He was eventually spotted by Sunshine Coast and put in the Melbourne system, before being forced to bide his time until the chance arose with Ryan Papenhuyzen’s injury last year.

“You’ve got to back your ability as an NRL player and as a human being,” Hynes said.

“I always knew (I could make it) when I was sitting there watching on the bench or not getting picked.

“Watching the likes of Paps, Hughesy (Jahrome Hughes), (Cameron) Munster. I just thought, why can’t I do that?

“I’ve got their skill and I’ve got the smarts. They’ve got different attributes that are better than mine.

“And I might have different attributes that might be better than theirs. But I always knew when I get my opportunity, why can’t I?”

How tiny symptom led to mum losing both feet and 10 fingers: ‘It’s vital lessons are…