That’s not fair: Cherry-Evans opens up on Hasler exit, talk of fractured squad 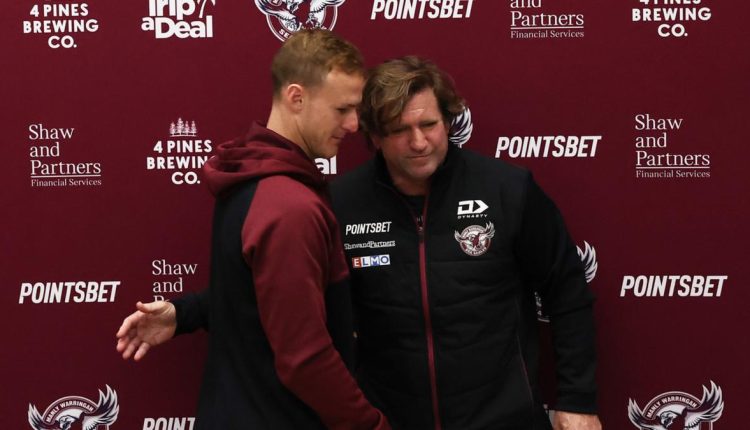 Manly captain Daly Cherry-Evans has dismissed concerns his club’s next coach will inherit a fractured squad as they prepare for life after Des Hasler.

Currently on tour with the Kangaroos in England, Cherry-Evans awoke to the news in Manchester on Thursday that Hasler’s second coming at Manly had come to an end.

WATCH IN THE VIDEO ABOVE: Daly Cherry-Evans opens up on demise Des Hasler.

Hasler’s long-term performance manager Don Singe also announced on Monday that he had left the club.

Only 12 months ago Hasler got the Sea Eagles to a preliminary final but the fallout from the club’s disastrous end to the 2022 NRL season as a result of their botched handling of the pride jersey led to him being shown the door.

Seven players sat out their round-20 game with the Roosters and Manly didn’t win a single game thereafter, blowing their chance of making the finals.

Since Hasler’s axing, stories have emerged, claiming the Trbojevic brothers were now weighing up their long-term futures at the club.

Former Brisbane coach Anthony Seibold is considered the front-runner to take over from Hasler for next year.

But Cherry-Evans gave short shrift to the idea that the incoming coach’s first task would be to build bridges in a divided team.

“I don’t think that (saying Manly is a divided team) is fair,” he said.

“That’s an assessment made from the outside.

“We would’ve loved to have won eight footy games at the end of the season, but we just couldn’t.

“When you’re losing, it allows for comments like that to be made. We just couldn’t get out of that rut.”

Cherry-Evans spoke to Hasler last week and has been in dialogue with club chief executive Tony Mestrov.

The skipper was confident the Trbojevic brothers and the other players in the squad would stick around under whoever replaces Hasler.

“I guess the playing group can be a little bit concerned about the coach’s new direction,” he said.

“This isn’t the first time that an NRL team has got a new coach.

“I’m pretty sure we’ll all be looking forward to getting in there and rectifying what was a pretty poor year last year.”

The Manly skipper never envisaged a world in which Hasler would be axed so soon after last season’s success.

And while he highlighted the fact he had a good bond with Seibold, he stopped short of endorsing the former Sea Eagles assistant for the top job.

“If he (Seibold) was to be the coach it’s helpful that I’ve already met him and have a relationship with him,” he said.

“But I’m not sure if the club has moved down that path.”

Cherry-Evans is likely to cede his Australian halfback berth to Nathan Cleary this week as the Kangaroos face Scotland in their second World Cup group game.

The 33-year-old didn’t overplay his hand in their opening win against Fiji and said he and the rest of the squad could take things up a notch.

“It was great to get the first win out of the way, but there’s certainly a lot of improvement for not just myself but the whole team,” he added.

Aussie tennis star wins first title days after losing mum to cancer: ‘We did it’

The 2022 Cox Plate barrier draw revealed, news not so bright for Mr Brightside