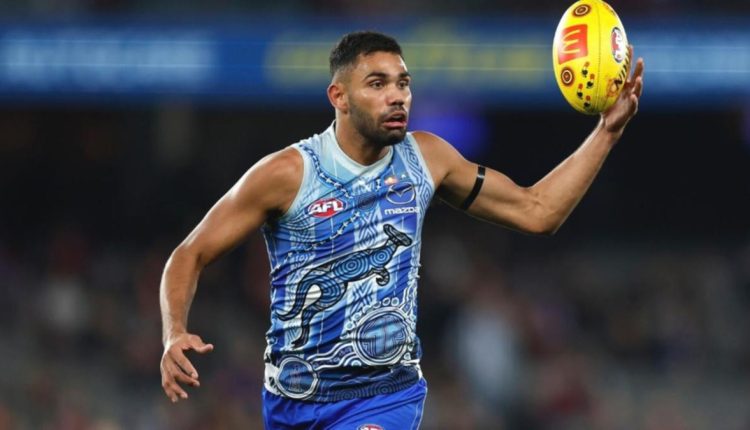 North Melbourne youngster Tarryn Thomas has told 7NEWS he will see out at the least the rest of his current AFL contract, which expires at the end of 2024.

It has been reported that the Kangaroos were in danger of being asked to facilitate a trade for Thomas, having already had prized No.1 draft pick Jason Horne-Francis request a trade to Port Adelaide.

That would have been a disaster for the Roos, who need to cling on to every last bit of young talent they have.

But speaking to 7NEWS, Thomas said he is not going anywhere for now at least.

“I’ve still got another two years,” he said.

“I want to focus on my footy and do my two years at North Melbourne.

“Whatever the future holds, (I don’t know), but at the moment, I’m happy at North.

“I love the club. The club has done a fair bit for me and my family.”

Thomas, one of the Kangaroos’ Indigenous stars along with best and fairest winner Jy Simpkin, is hoping Alastair Clarkson will be free to return to the club as coach, despite battling claims of historical racism with First Nations players during his time at Hawthorn.

Thomas said before learning of the shocking allegations, both he and the group had already made a good connection with Clarkson.

“He came to the club when the season finished and had a meeting with us as a whole group,” Thomas said.

“(I) had a one-on-one after the best and fairest before everything happened. Our relationship has been pretty good.

“He’s a legend of a coach and a I love him as person. (I) haven’t spoken to him since (the revelations), but hopefully it goes alright.”

He has thrown his full support behind Clarkson coming back to lead the Roos.

“He’s a great coach and we’d love to have him, but we’re just waiting to see what happens (with the AFL investigation). Whatever happens, happens but yeah would be great to have him.”

But regardless of Clarkson’s presence or not, Horne-Francis wants to get out of Arden Street, despite having played just one year in the blue and white.

Thomas said he “was pretty close with Jason, so it’s pretty flattening.”

“But that’s what is best for him and his family at the moment and his health and that’s what I care for. (South Australia) is where he plays his best footy, his family is there … it is what it is, hopefully he has a future wherever he goes. Best of luck to him.”