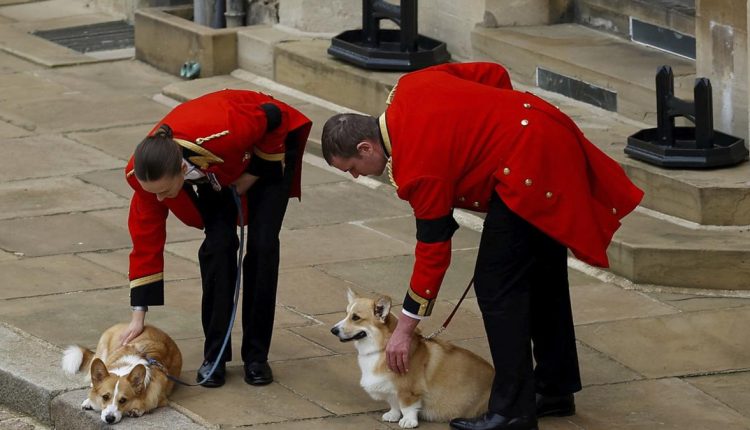 Sarah Ferguson, the Duchess of York, has given a sweet update on how Queen Elizabeth’s two corgis have been faring since her death on September 8.

Sandy and Muick brought tears to the eyes of many as they were pictured waiting outside Windsor Castle as the Queen’s coffin arrived.

WATCH THE VIDEO ABOVE: The Queen’s last two corgis say goodbye to their mum

Since their owner’s death, the corgis have been living with Ferguson and her ex-husband, Prince Andrew, along with their five Norfolk Terriers at the Royal Lodge in Windsor.

That makes for quite the menagerie, but according to Ferguson, they’ve fitted in well.

Speaking to The Telegraph recently, Ferguson said it was a “big honour” to be entrusted with the care of the Queen’s beloved pets, and that Sandy and Muick have been “taught well.”

“They all balance out, the carpet moves as I move, but I’ve got used to it now,” she joked.

It’s understood that Sandy and Muick were in the room at Balmoral Castle when the 96-year-old died.

Muick is named after Loch Muick on the Balmoral estate in Scotland.

Sandy was a present from her son, Prince Andrew, and his daughters Beatrice and Eugenie on the occasion of her 95th birthday.

Her first corgi, Dookie, was a present from her father, King George VI, sparking a life-long love affair with the breed.

Over the years, Elizabeth went on to own more than 30 corgis.

TV presenter and actor Alexander Armstrong once revealed that he found handwritten letters penned by Queen Elizabeth from her corgis to some of the dogs of her royal staffers.

Most of the correspondence was from the Queen to her former equerry, Sir Blair Stewart-Wilson.

Stewart-Wilson had the letters framed and put up around his home, Armstrong said.

Having read some of them, Armstrong said the Queen’s notes were “wickedly funny”.