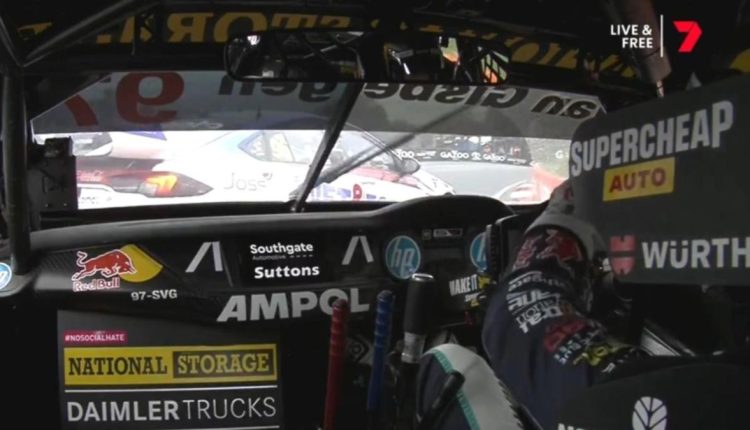 Tickford ace Cam Waters has finished on top in qualifying at the Bathurst 1000 while Supercars championship leader Shane van Gisbergen is under investigation ahead of the top-10 shootout.

Waters ended the wet session two tenths clear of last year’s winners Lee Holdsworth and Chaz Mostert, and van Gisbergen could only manage fourth – but his participation in the shootout is under question.

Van Gisbergen tagged the rear of Macauley Jones’ car heading into the esses after Skyline on the final lap of the session.

Meanwhile, Supercars legend Jamie Whincup’s decision to pull rank on his replacement Broc Feeney backfired after the No.88 car finished 14th to miss the shootout.

“As you saw in practice, Broc was doing well initially and didn’t keep progressing so we didn’t want to over-pressure him,” Triple Eight’s Mark Dutton said as he explained the call.

“We’re the only people with the fortunate position to have a seven-time champion as the co-driver, it’d be a pretty silly move for us not to do it.

“Relieve the pressure from Broc, he can catch his breath, look at more data overnight, analyse that and come back tomorrow.

“We looked at some different options (leading into the weekend), once again because we do have James as co-driver, but the actual decision was made today.”

Comeback kid Richie Stanaway put the No.51 wildcard into the shootout with the fifth best time of the session.

Everything you need to know about the Bathurst 1000 on Seven

Stanaway finished ahead of Erebus teammates Brodie Kostecki and Will Brown, who finished ninth and 10th respectively.

Brown’s effort to reach the shootout was particularly impressive given he ended the final practice session in the wall to leave his car needing nearly two hours of repairs after a practice crash.

Waters held top spot throughout the final stages of qualifying and will be the last car out of pit lane in tomorrow afternoon’s session to decide the order of the top 10.

“He drove fantastically, and full credit to the whole field – no red flags until the very end there,” Waters’ co-driver James Moffat told Channel 7.

“They earned their money today. Great for Cam to be able to get those laps in and for (Tickford teammate James Courtney) to sneak into the top 10. For the team to have two cars in the top 10 is fantastic.”

The forecast suggests tomorrow’s shootout could be even wetter than qualifying, which largely took place during a break in the rain.