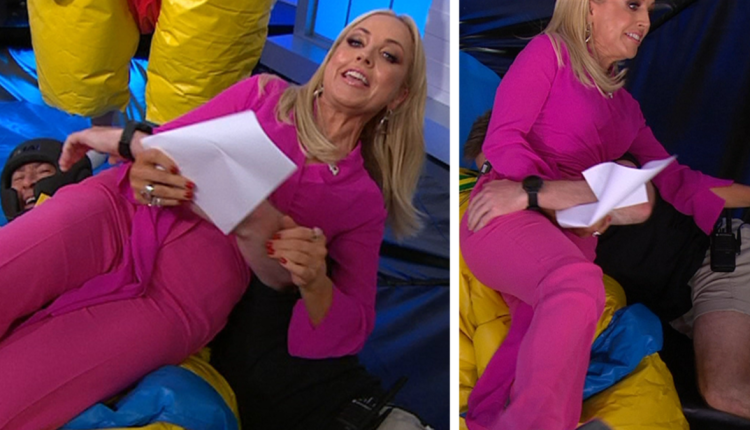 Monique Wright was ever the professional when a Sunrise segment took a hilarious turn.

The Weekend Sunrise co-host, who was filling in for Nat Barr on Thursday, was tackled to the ground by a sumo-suit-wearing Mark Beretta – but she gamely continued to read out her prompts.

To mark the Sumo Suit championship on in Sydney on Thursday night, two hand-picked contestants, Lee and Amy, battled it out on the Sunrise stage.

After Amy lost the first round, it was her task to take on Sunrise’s sumo wrestler Mark Beretta, who had adorned his bright yellow suit with a Socceroos scarf.

Stepping onto the padded flooring, Amy defeated Beretts, tackling him to the ground.

As Monique went to explain the details of the Sumo wrestling night, she reached down to give Beretts a hand up.

“Don’t give him a hand!” Kochie yelled out – a little too late.

Mon and a crew member were both tackled down, with the presenter awkwardly falling on top of Beretts, who lay underneath in his sumo suit.

Struggling to stay somewhat upright, Mon attempted to carry on with closing the segment, managing to get out: “Still to come this morning we’ve got some breaking news.”

“Australia to play Argentina in the knockout round of the World Cup,” she said laughing.

Kochie then stepped in to help his colleague take over the closing dialogue, as Mon tried to get off the floor.

The hilarious video was later posted to Sunrise’s social media, where viewers praised Mon’s professionalism during the off-script moment.

Kochie’s on-air blunder with Sam Mac visibly stuns weatherman: ‘After all we’ve been through’

Photo leaves fans ‘100 per cent convinced’ Bindi Irwin has major news to share: ‘We see it’