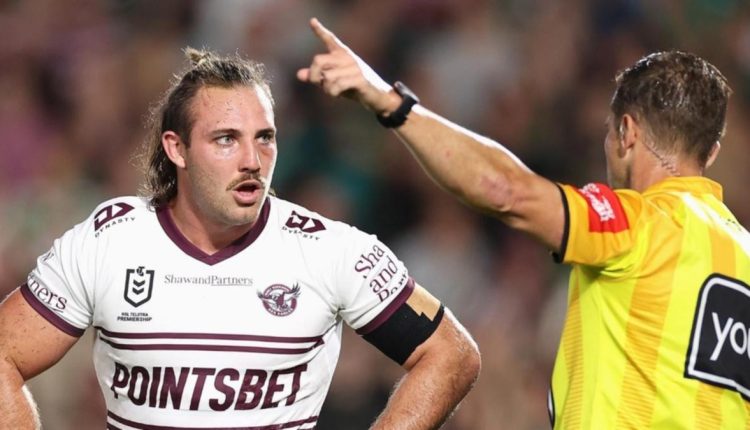 Cameron Murray has made the startling admission he feels for Karl Lawton after the Manly forward accepted a four-match ban for a dangerous throw.

The Sea Eagles on Monday informed the NRL they would not fight the grade-three charge against Lawton, who upended Murray in alarming fashion on Friday night.

The decision means Lawton avoids the risk of spending a fifth match on the sidelines, having already become just the second player sent off for a dangerous throw in the NRL era.

The 26-year-old has since apologised to Murray over the incident, which went wrong when momentum flipped the South Sydney captain head-first into the turf as Lawton lost his feet.

While Murray was relieved to have walked away unscathed, he believed the tackle looked far worse on replays than it felt in the moment.

“I agree a player’s welfare needs to come first but as a player you can’t really help but feel empathy towards your fellow players,” Murray said.

“I know no one goes out there to intentionally hurt someone like that.

“I know Kyle didn’t do it intentionally and I know he didn’t try to put me on my head.

“I tend to look at it from a player’s perspective in terms of it being accidental.”

Murray’s comments came as the NRL’s head of football Graham Annesley confirmed he was happy with the send-off call.

“It was quite an easy decision for the match officials to make because he was the only one involved in the tackle,” Annesley said.

“I’m sure there was no intent. Karl has indicated that and I have no doubt that is the case.

“But it has the potential for catastrophic outcomes.

“So even though he didn’t intend to do some of those things, the game has a responsibility to protect the players on the field.”

Annesley said he could understand why officials did not sin bin Jack Wighton for his dangerous throw on the Warriors’ Reece Walsh.

The Canberra star on Monday accepted a two-game ban for the incident, with his major crime being lifting the fullback’s leg and throwing him off balance.

The suspension means the Raiders will be without their two first-choice halves for the next two weeks, with the injured Jamal Fogarty unavailable long-term.

The ban comes as a blow to Wighton’s NSW State of Origin hopes, be it off the bench or as an outside chance to start at left centre to cover the expected absence of Latrell Mitchell.

Despite Wighton being handed a grade-two charge, Annesley said the fact there had been two players in the tackle complicated the balance of fault for match officials during the game.

“I have some sympathy for the match officials in trying to process that all very quickly to come up with what action should be taken,” Annesley said.