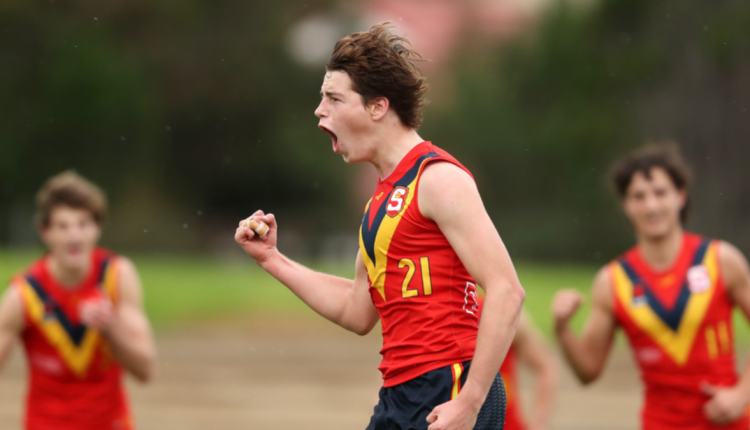 The AFL draft is about to begin and young gun Mattaes Phillipou has put the competition on notice by admitting he prefers a move to a big club.

Speaking exclusively to 7NEWS reporter Andrew Hayes, 18-year-old Phillipou said he likes big crowds and would love to play regularly at the MCG, despite being from South Australia.

“I’ve always wanted to be in the spotlight and play in front of big crowds,” Phillipou said.

“I want to get all the big games and all the Melbourne teams get that.

“It will awesome playing at the ‘G (MCG) every two weeks or at the Etihad.”

Phillipou, a brilliant 191cm midfielder who models his game on Western Bulldogs star Marcus Bontempelli, is widely considered a genuine top-five draft pick after an impressive 2022 season at various SANFL levels and the national championships.

Essendon, who hold pick four in the draft, have shown interest in selecting Phillipou and the feeling seems to be mutual.

“It’s awesome, Essendon have been excellent to talk to, just like the other clubs,” Phillipou said.

“It’s definitely exciting when a club is interested in me.”

Phillipou has enjoyed a successful junior footy career which included representing South Australia at the National Championships and winning a SANFL U18 premiership with the Eagles in 2021.

Phillipou, who can also play as a forward, announced himself to AFL recruiters last season when he kicked 25 goals and averaged 23.3 disposals as a bottom-ager.

This season the young gun spent time playing reserve grade and played eight under-18 games, finding the ball at will and pushing forward to get on the scoreboard, averaging 28 disposals, 6.6 marks, 5.1 tackles, 4.3 clearances and 1.5 goals per game.