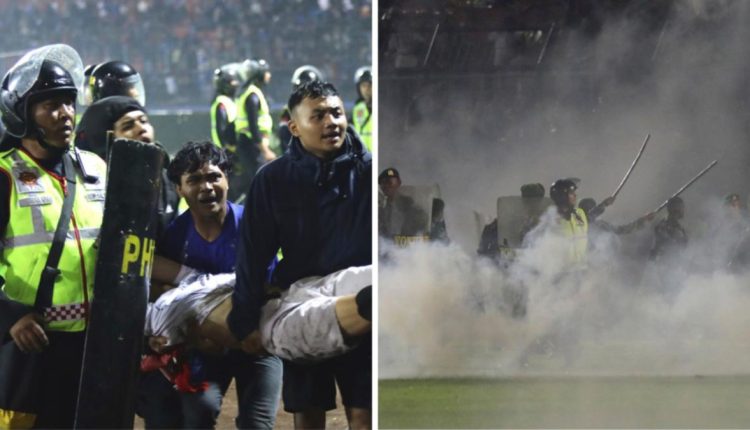 At least 174 people have been killed and scores more injured in a stampede and riot at a soccer match in Indonesia in one of the world’s worst stadium disasters.

When frustrated supporters of losing home team Arema invaded the pitch in Malang, East Java, late on Saturday, officers fired tear gas in an attempt to control the situation.

“It had gotten anarchic. They started attacking officers, they damaged cars,” Nico said, adding the crush occurred when fans fled for an exit gate.

Deputy East Java Governor Emil Dardak told local media on Sunday that at least 174 people had been killed as a result of the stampede.

Scuffles can be seen, with what appeared to be tear gas in the air.

Images showed people who appeared to have lost consciousness being carried away by other fans.

The head of one of the hospitals in the area treating patients told Metro TV some of the victims had sustained brain injuries and the fatalities included a five-year-old child.

Indonesian President Joko Widodo said authorities must thoroughly evaluate security at matches, adding he hoped this would be “the last soccer tragedy in the nation”.

Jokowi, as the president is known, ordered the Football Association of Indonesia (PSSI) to suspend all games in the top league, BRI Liga 1, until an investigation is completed.

World soccer’s governing body FIFA specifies in its safety regulations no firearms or “crowd control gas” should be carried or used by stewards or police.

East Java police did not immediately respond to a request for comment on whether they were aware of such regulations.

The country’s chief security minister, Mahfud MD, said in an Instagram post the stadium had been filled beyond its capacity.

He alleged 42,000 tickets had been issued for a stadium that is only supposed to hold 38,000 people.

There have been sporadic outbreaks of trouble at matches in Indonesia, with strong rivalries between clubs sometimes leading to violence among supporters.

FIFA has requested a report on the incident, and a team from the sport’s governing in Indonesia has been sent to Malang to investigate, PSSI secretary general Yunus Nusi said.

Indonesia’s human rights commission also plans to investigate security at the ground, including the use of tear gas, its commissioner told Reuters.

Amnesty International Indonesia slammed the security measures, saying the “use of excessive force by the state … to contain or control such crowds cannot be justified at all”.

The country’s chief security minister, Mahfud MD, said in an Instagram post the stadium had been filled beyond its capacity. He alleged 42,000 tickets had been issued for a stadium that is only supposed to hold 38,000 people.

Financial aid would be given to the injured and the families of victims, East Java Governor Khofifah Indar Parawansa said.

Indonesia’s football scene has been blighted by hooliganism, heavy-handed policing and mismanagement, largely preventing the country of 275 million people who pack stadiums from harnessing its potential in the sport.

The Malang stadium disaster appears to be the deadliest since 1964, when 328 people were reported dead in a riot and crush when Peru hosted Argentina at the Estadio Nacional in Lima.

Indonesia is scheduled to host the FIFA under-20 World Cup in May and June next year.

They are also one of three countries bidding to stage next year’s Asian Cup, after China pulled out as hosts.

The head of the Asian Football Confederation, Sheikh Salman bin Ibrahim Al Khalifa, said in a statement he was “deeply shocked and saddened to hear such tragic news coming out of football-loving Indonesia”.

Stadium disasters in the past 40 years

Following the death of at least 129 people in a stampede at a football match in the Indonesian province of East Java, here is a look at some of the other major disasters in soccer stadiums over the last 40 years.

At least eight people died and 38 were injured in a stampede at the Yaounde Olembe Stadium in Cameroon before the host country’s Africa Cup of Nations last-16 game against Comoros.

Fans rioted at the end of a match between Al-Masry and Al-Ahly in the city of Port Said. At least 73 people were killed and more than 1000 injured. The Egyptian league was subsequently suspended for two years.

At least 19 people were killed during a stampede at Abidjan’s Felix Houphouet-Boigny stadium before a World Cup qualifying match against Malawi.

More than 125 people were killed in a stampede at Accra’s main stadium when police fired tear gas at rioting fans in one of Africa’s worst soccer disasters.

At least 43 people were crushed to death when fans tried to force their way into Johannesburg’s huge Ellis Park stadium midway through a South African league match.

Up to 82 people died and at least 147 were injured when an avalanche of fans tumbled down seats and a flight of stairs at a World Cup qualifying match between Guatemala and Costa Rica.

A stand at Bastia’s Furiani Stadium collapsed before a French Cup semi-final against Marseille, killing 18 and injuring more than 2300. Last year, the French parliament passed a law banning professional matches taking place on May 5, in memory of the victims.

Forty-two people died in a stampede during a pre-season game at the Oppenheimer Stadium in the mining town of Orkney between the Kaizer Chiefs and the Orlando Pirates. A Pirates fan had attacked Chiefs supporters in the crowd with a knife.

Ninety-six Liverpool supporters were crushed to death in an over-crowded and fenced-in enclosure at the Hillsborough Stadium in Sheffield before the FA Cup semi-final between Liverpool and Nottingham Forest. One victim died in July 2021, 32 years after suffering severe brain damage in the incident.

A stampede towards locked exits in a hailstorm at Nepal’s national soccer stadium in Kathmandu killed more than 90 fans.

Thirty-nine fans died and more than 600 were injured in fan violence before the European Cup final between Juventus and Liverpool at the Heysel Stadium in Brussels.

At least 56 people were killed and more than 200 injured when fire broke out in the stands at the Valley Parade stadium in Bradford during a third division match against Lincoln City.

Fans were crushed as they left a UEFA Cup tie between Spartak Moscow and Dutch side HFC Haarlem at the Luzhniki Stadium in Moscow. Officials from the former Soviet Union did not disclose the tragedy for years. When they did, they gave an official death toll of 66, although it is widely believed the number who died in a crush at one exit could have been as high as 340.