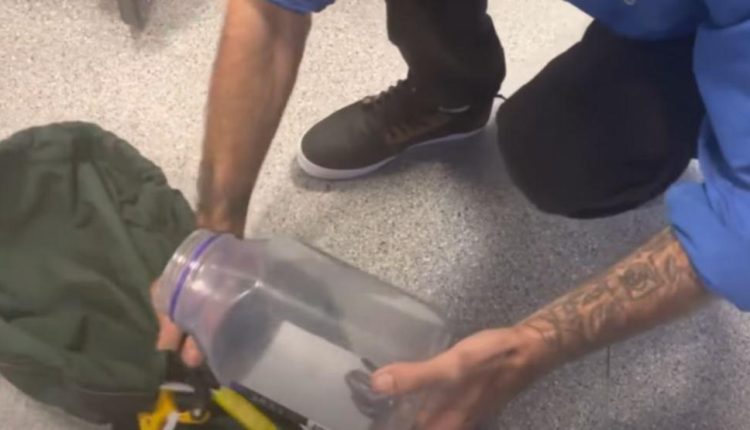 A snake catcher had to remove a deadly snake from a Queensland hospital after a bite victim took it in with him, against all known advice.

Drew Godfrey from Hervey Bay Snake Catchers was called to Hervey Bay Hospital last Friday night when staff reported what was thought to be a juvenile red belly black snake.

WATCH THE VIDEO ABOVE: Deadly snake removed from Queensland hospital.

A man who had been bitten by the snake put it into a plastic container and took it to the hospital with him when he sought treatment.

Godfrey says the move goes against his advice – and that of Queensland Health.

“The hospital probably has the same duty of care that I do, which is to tell people never to touch them because that’s the best way to not get bitten,” Godfrey told 7NEWS.com.au.

The experienced snake catcher also said the victim was mistaken in believing it was a red belly black.

He said the snake was an eastern small-eyed snake, which is described as extremely venomous.

“A red belly is not likely to kill someone,” Godfrey said.

“It’s more likely – an untreated bite – to be necrotic and you might lose a thumb, for example, rather than for it to kill you.

“An eastern small-eyed snake, an untreated bite has caused at least one fatality, whereas red belly black snakes have never killed anyone.

The patient has recovered from the bite and been released from hospital.

Advice on a Queensland Health website confirms people should not catch snakes and bring them to hospitals.

Hospital staff do not need to know the identity of the species of snake to treat patients, it said.

“Don’t try to identify, catch, injure or kill the snake – you’re likely to come off second best,” the website advises.

“At the hospital, staff have access to a range of tests that can help them determine the likely snake which you have been bitten by, enabling them to give you the most appropriate treatment.”

Wide Bay Hospital and Health Service confirmed the patient brought the snake with him to the emergency department.

“We would like to caution community members about the risk of snake bites, and encourage them to minimise these by ensuring that they do not pick up or handle snakes unless they are professionals, and that bringing a snake with them when they present to hospital is not necessary and can in fact endanger others,” spokesman Ben Ross-Edwards told 7NEWS.com.au.

“WBHHS urges the community to use caution to avoid being bitten by snakes and to practice vital first aid in the event of a snake bite.

“If possible, people with a suspected or known snake bite should present to their nearest hospital as soon as they can after being bitten.”

Grandmother scammed with easily-overlooked detail during sale: ‘It caught me’