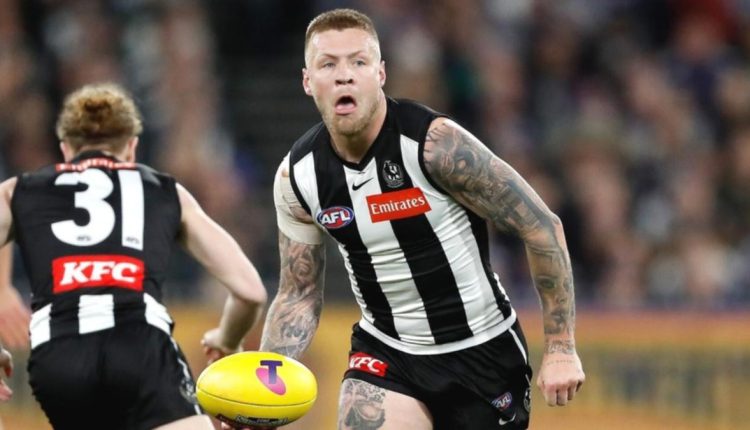 St Kilda are firming as Jordan De Goey’s AFL club of choice for 2023.

The unsigned free agent has been considering his future for some months, and it had looked likely that he would remain in black and white.

But 7NEWS Melbourne’s Tom Browne has revealed that the Saints are now becoming quietly confident that they can poach the superstar midfielder from Collingwood.

“This is now a cliffhanger in terms of the contract for his services. Collingwood, tonight, don’t know his response,” Browne said on 7NEWS on Thursday night.

“St Kilda now genuinely think they’re a chance of landing Jordan De Goey and pulling off what could be an absolutely massive coup, remembering they’re unlikely to have the behavioural clauses, or at least as stringently as Collingwood is insisting on.

“It’s their best and fairest, the Copeland trophy, tomorrow night.”

It is expected that he will make his decision within the coming days.

De Goey and the Magpies are in a standoff over the original five-year deal after he knocked back Collingwood’s lucrative offer due to some of the contract’s strict behavioural clauses.

The Magpies want a level of protection in writing for the 26-year-old, who has been involved in several off-field incidents throughout his career.

Last October, De Goey was arrested during a drunken incident in a New York nightclub and later pleaded guilty to a downgraded charge of harassment.

He was also in hot water earlier this year when a video emerged of him making lewd gestures at a bar in Bali during the Magpies’ mid-season bye. That indiscretion saw the club withdraw their earlier contract offer.

De Goey played 16 games in 2022, but saved his best for the finals series with two brilliant performances against Geelong and Fremantle.

But things have not gone as smoothly as planned, with De Goey rejecting at least one of the behavioural clauses in the contract and the club copping criticism over their addition.

The enigmatic midfielder would be a massive addition to St Kilda, who were on the cusp of finals in 2022 and have a dearth of A-grade talent on their list.

Collingwood are set to be busy players in the trade period with Brodie Grundy likely to request a trade to Melbourne in the coming days.

The Pies will bring free agent Dan McStay in from Brisbane, while also trying to trade for Crow Billy Frampton and Giant Bobby Hill.

They could also land Brownlow medallist Tom Mitchell, who 7NEWS reporter Mitch Cleary revealed is weighing up his future.