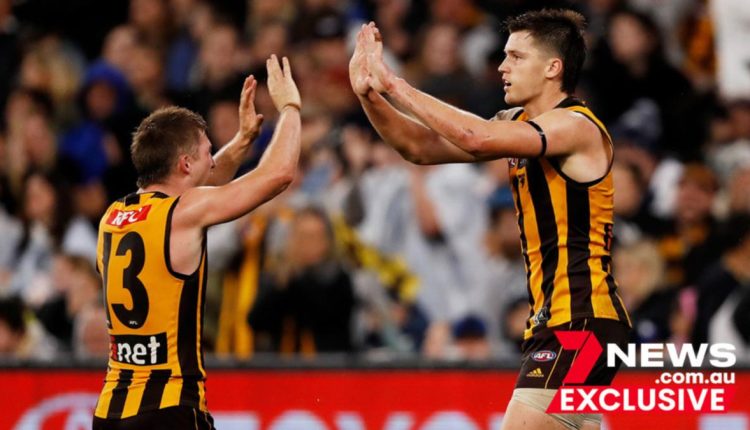 Hawthorn spearhead Mitch Lewis has pledged his future to the Hawks, signing a new four-year deal, 7NEWS can reveal.

It will see the Lewis extend his stay at Waverley Park until at least the end the of 2026.

In the video above: Jordan De Goey apologises for his Bali antics

The 23-year-old has emerged as one of the leading key forwards in the competition this season, averaging three goals per game – ranked No.2 in the AFL.

Lewis committed early in the season to the Hawks, informing rivals in need of a key forward – such as Collingwood and Essendon – that he had no plans in leaving.

It caps a meteoric rise for Lewis, from being taken at pick No.76 in 2016 to becoming a mainstay under Hawks coach Sam Mitchell.

“From pick 76, I didn’t really expect to play one game, let alone ending up at the Hawks, it’s going to be 10 years now,” Lewis told 7NEWS.

“Just to repay the faith and we’ve got a really exciting young group coming through. I’m just super happy to ride the journey with them.”

Lewis returns from knee swelling to face the Western Bulldogs on Friday night at Marvel Stadium.

Beware Richmond’s ‘blind belief’ in run home to the finals

Meanwhile, Daisy Pearce has run the rule over a “crazy” AFL round 15, and she has her sights set on Saturday afternoon’s finals-defining blockbuster between Geelong and Richmond.

The rest of round 15 shapes as one of the most exciting rounds of footy in recent history, with mini finals littered throughout the fixture.

“Where do you start? It’s a crazy round,” Pearce told 7NEWS.com.au.

Pearce zeroed in on Saturday’s clash between the Cats and Tigers.

“The Geelong-Richmond game really fascinates me, and I think it’s one that will really shape the top eight,” she said.

“When you look at their numbers, Richmond are starting to get back to that brand of footy that won them the three premierships. I think if they can stay healthy – they’ve had Trent Cotchin go out, Noah Balta with a hamstring as well – and time their run for the end of the year, you’d never discount them.

“I’m someone who will believe in Richmond even when their form doesn’t quite warrant it because I just have so much admiration for them. They just have blind belief in themselves that only a very successful club has, and I think that will hold them in good stead, come finals time.

“While other teams who might be thereabouts at the pointy end start to have doubts because they haven’t been there, Richmond will have a belief that their best can get it done because we’ve got evidence of that.”

The Tigers have won six of their past seven games to storm back inside the top eight and firm as finals – and even premiership – contenders.

But Pearce says this week will be a real acid test for them.

“This is a big test for them because through a shaky start, they’ve pieced back together what looked more like that dominant Richmond we’ve all come to know,” she told 7NEWS.com.au.

“I think to test it against genuinely good opposition in Geelong is something that they’ll embrace and something that is a fascination for us looking on – how real are they? We’ll find that out.

The 2020 grand final replay is an even-money bet, with the Cats presenting a starkly different challenge to the one they offered in the grand final defeat from two years ago.

“If you think about some of the shortcomings that were there on that day and the reasons why they didn’t get it done – they’ve addressed a lot of them,” Pearce said.

“They were criticised for going too slow, but now they’ve got a game style that has gears and they can go a bit faster, which amplifies the assets they’ve got up forward in Tom Hawkins and Jeremy Cameron. Plus, they’ve added Tyson Stengle who’s in great form and has added a new dimension of speed and creativity of flare around goal, which they didn’t have.

“I think down back too, with Sam De Koning holding up an end, it allows Tom Stewart the freedom to be able to use his speed at ground level, which was a bit of a hole, I thought, defensively, for the Cats back in 2020.”

Pearce said she wouldn’t count out any side in the top 12 for a finals berth, but has a particular watch set on 2021 grand finalists, the Bulldogs.

“They’re outside the eight and they can’t really afford to lose, but if they find a way to get in there, they could really shake it up,” she said.

“At their best, they would threaten a lot of sides. I feel like they’ve got a few pieces moving into place that might get better in the back half of the year as well, should they be able to bank enough wins.”