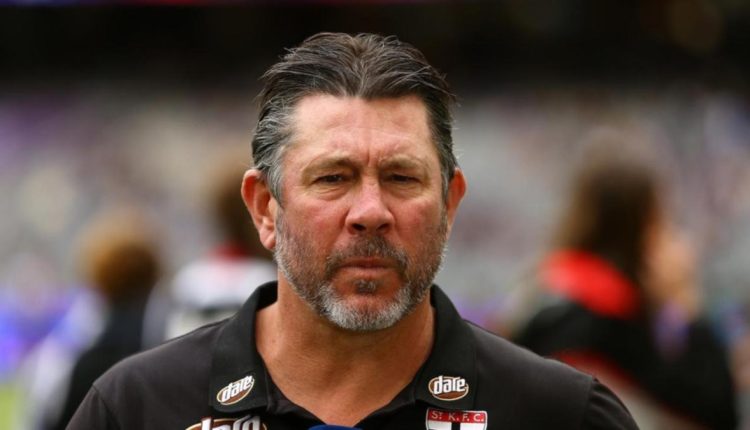 Sacked St Kilda coach Brett Ratten will not be lost to the AFL, taking up a part-time position with rival club North Melbourne.

Ratten will be reunited with Alastair Clarkson at Arden St, after working with the four-time premiership mastermind as an assistant at Hawthorn before joining St Kilda in 2019.

Clarkson is busy getting his band back together, also appointing Damian Monkhorst (another former long-term Hawthorn assistant) and Leading Teams (a consultancy firm he’s previously worked with).

Ratten was brutally dismissed by St Kilda in October and replaced by that club’s former coach Ross Lyon.

The decision came as a massive surprise given it was less than 100 days after he had signed a two-year contract extension.

Ratten worked with Clarkson from the end of 2012 up until the end of the 2018 season, taking in the club’s glorious era that included three consecutive premierships.

The 51-year-old was St Kilda’s caretaker coach for the final six rounds of the 2019 season, following Alan Richardson’s departure, then was senior coach from 2020 until 2022.

He took St Kilda to the finals in 2020 (and even won a final), but missed out on September action in the following two seasons.

“Brett comes to the club as an experienced, knowledgeable football person and we are thrilled to welcome him to Arden St,” North Melbourne’s general manager of football Todd Viney said in a statement.

“Brett is a highly regarded operator who has been part of premiership success during his time at Hawthorn.

“His vast coaching experience will be a huge asset for our club.”

The Kangaroos said they would look to fill a remaining coaching vacancy in the coming weeks, after not renewing the contracts of former assistants Anthony Rocca and Heath Younie.

Clarkson started his job at North on November 2 despite a panel investigating serious allegations of racism at Hawthorn between 2008 and 2016.

Both men strongly deny all claims made against them.