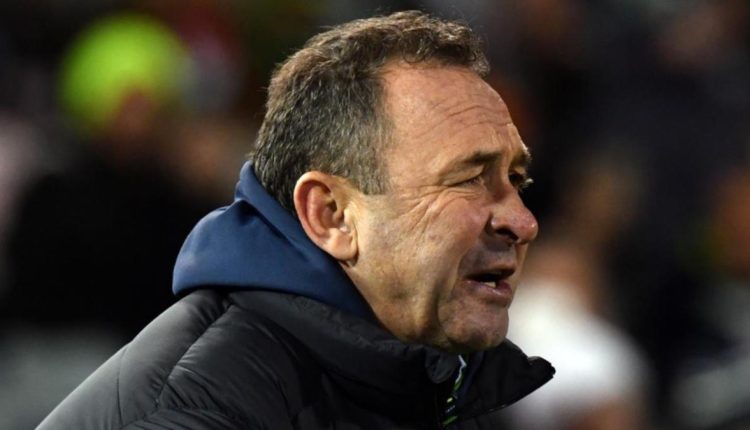 Stuart apologised on Sunday after making the comments in a post-match press conference, claiming he was speaking as a father and not as a coach during the outburst.

The feud is believed to be related to a dispute from more than a decade ago, when Salmon and Stuart’s son played football in the same team in a Cronulla junior competition.

The issue boiled over again when Stuart was asked about Salmon appearing to lash out with his foot in a tackle, with his boot connecting with Raider Tom Starling’s groin and face.

Stuart’s comments in Canberra came as emotions ran high, with the Raiders’ 26-6 loss to the Panthers leaving them in a struggle to make the NRL top-eight.

“I regret saying what I did on that platform after the game,” Stuart said in statement on Sunday.

“I was speaking as a father and not as a football coach. My reaction was to a family situation that I thought I had dealt with. Clearly I haven’t.

“I allowed my emotions to get the better of me and for that I’m sorry.

“There is a history between Jaeman Salmon and my family that I will not go into.

“I should not have brought it up after the game, but it just got the better of me. I am truly sorry.”

Salmon was given a grade one contrary conduct charge over the incident by the match review committee on Sunday and faces a fine of $1000 with an early guilty plea.

The 23-year-old desperately wanted to speak to media on Saturday night to give his side of the story, but was instructed not to do so by Panthers coaches.

Penrith confirmed to AAP on Sunday morning that they were in talks with the NRL and may consider legal action on their player’s behalf.

The NRL has also shown interest in Stuart’s comments, with chief executive Andrew Abdo confirming it will be a matter for the integrity unit.

Stuart has been fined more than $100,000 throughout his coaching career and there is some thought his latest comments could prompt a suspension.

“Clearly the comments are disappointing and we’re going to take a close look at them,” Abdo told Sky Sports Radio.

“It’s a live matter, clearly it is very serious, we will take a look at it and understand all the facts.

“Whenever there is an issue like this we ask the integrity unit to take a look at it.

“And obviously as the decision-maker I need to involve myself and speak to the respective parties as well.”

A coach has never been banned for post-match comments and even the late Bob Fulton escaped with a $6000 fine for his cement truck remark to former referee Bill Harrigan in 1987.

‘I love that’: Aussie great lauds Browning for response to relay devastation