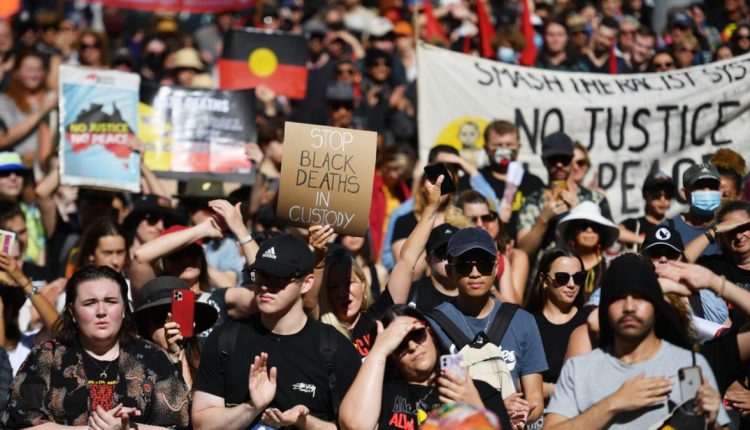 Protests will be held in at least four Australian cities calling to “abolish the monarchy” on the National Day of Mourning for the Queen.

Anti-monarchists will to take to the streets in Brisbane, Sydney, Melbourne and Canberra on Thursday, which has been declared a national public holiday.

WATCH THE VIDEO ABOVE: Hospital name change for royal tribute triggers a backlash.

Notices for the protests say they will decry past atrocities and the ongoing impact of British colonisation in Australia.

Activist groups Warriors of the Aboriginal Resistance (WAR) and Fighting In Solidarity Towards Treaties are among those organising the demonstrations.

“This is a stance against the continued crimes committed against marginalised First Nations, black, brown and Asian communities. We do not support benefactors or Stolenwealth (sic) and demand justice, truth and accountability for all. Justice for all,” WAR wrote on Facebook.

“This is a demonstration against racist colonial imperialism.”

A state funeral was held for Queen Elizabeth on Monday after her death aged 96 at Balmoral Castle in Scotland on September 8.

While supporters have hailed her 70-year reign, some Indigenous leaders say the British monarchy represents a violent history.

“The Commonwealth has blood on its hands. The death of Elizabeth II has sparked ongoing calls for justice for the dispossessed,” wrote organisers of the Sydney protest.

“First Nations sovereignty has never been ceded. Blackfullas here in so-called Australia and around the world will be out in protest.

“We demand a ceasefire to the continuing war against the planet and its custodians! We demand an end to inherited power and stolen wealth.”

Thousands of people have signalled their intention to attend one of the four protests on social media pages for the events.

Australian isn’t the only country where protests against the monarchy are being held.

A woman was arrested after a protester held an anti-monarchy sign outside St Giles’ Cathedral, in Edinburgh, Scotland, where the Queen’s coffin was being held in the days after her death.

A protest is being planned in Wales on Friday to mark King Charles III’s first visit to the country since ascending the throne.

The organisers said the silent demonstration will begin from 1pm at Cardiff Castle, one of three locations Charles will visit during his day-long tour of the capital.

Those attending the rally are expected to stand and hold signs with slogans such as “Why a Monarchy?” and “Real democracy now”.

Disgrace or beautiful tribute? Canadian PM lashed for singalong ahead of Queen’s funeral