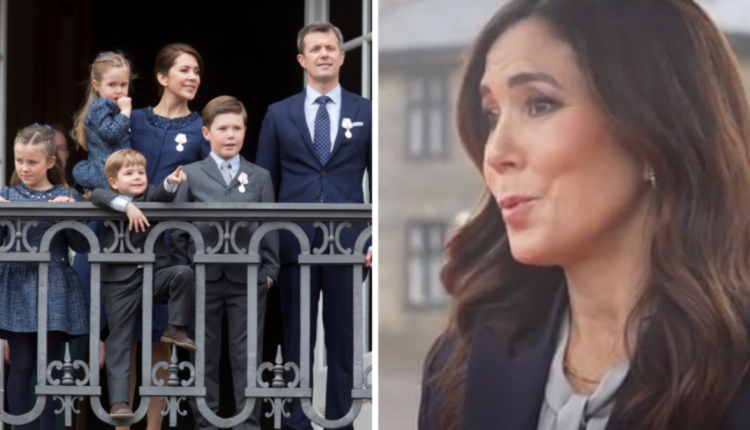 Crown Princess Mary of Denmark has spoken out about her mother-in-law Queen Margrethe’s decision to strip four of her grandchildren of their titles.

Princess Mary, 50, is the Australian-born wife of Margrethe’s son, Crown Prince Frederik of Denmark, her eldest son and heir.

WATCH THE VIDEO ABOVE: Romantic moment between Princess Mary and Frederik

Mary and Frederik’s oldest son Christian, 16, is currently second in line for the throne.

This week it was announced that the four children of Margrethe’s youngest son, Prince Joachim, would no longer be known as His or Her Royal Highness, in a move that shocked some Danish royal watchers.

At the moment, Mary and Frederik’s children – Christian, 16, Isabella, 15, and twins Josephine and Vincent, 11, retain their titles as direct descendants of the future King.

But in an interview with the Danish press in Copenhagen on Friday, Princess Mary hinted that “when the time comes,” the Danish royal family would also be assessing her children’s titles.

“Change can be extremely difficult and can really hurt,” she added.

“But this does not mean that the decision is not the right one.

King Charles III’s recent talk of “slimming down” the number of people in the family with royal titles appears to have had some impact on the Danish queen.

In announcing her decision, Margrethe said she hoped it would allow her grandchildren “to shape their own lives without being limited by the special considerations and duties” that come with being born into royalty.

But apparently the decision has created a major rift within the family.

Prince Joachim has claimed that he was only told the news five days before it was announced.

“We are all very sad. It’s never fun to see your children being harmed. They are been put in a situation they do not understand,” he said.

“I was given five days’ notice to tell them.

“In May, I was presented with a plan which, by and large, was that when the children each turned 25, it would happen.

“Now I had only five days to tell them. Athena turns 11 in January.”

Joachim is married to second wife Marie, with whom he has two children, Henrik and Athena.

Nikolai and Felix are his eldest children to first wife, Countess Alexandra of Frederiksborg.

Speaking to Danish magazine Se og Hør after the announcement, Alexandra said it was “a bolt from the blue.”

“The children feel ostracised,” she said.

“They cannot understand why their identity is being taken away from them.”

Out of respect for the late British monarch, Margrethe had asked her court to adjust the program for her own half-century anniversary commemorations which had been planned for 10-11 September.