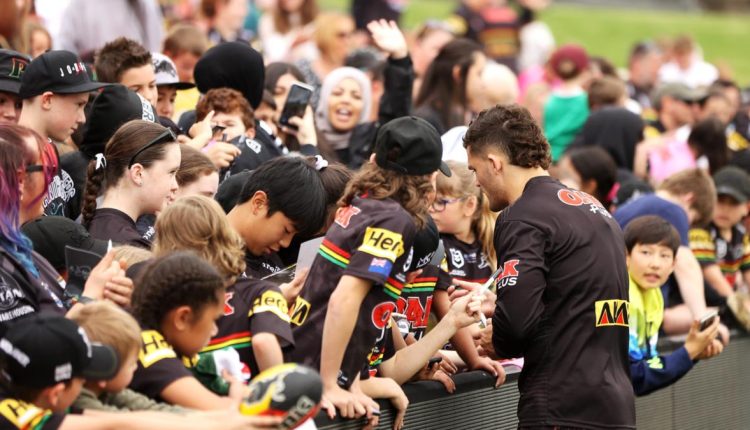 It’s shaping as ‘a war of the west’, NRL battle-lines have been drawn, and tickets for this All-Sydney grand final were sold out in record time as the Parramatta Eels plot an end to a 36-year drought.

But standing in their way are Penrith, who have their own history to write as they aim for back-to-back flags in what will be their third consecutive grand final. It is all pointing to a massive game on Sunday with an electrifying atmosphere, but it comes with a warning from police.

WATCH THE VIDEO ABOVE: Police put NRL partygoers on notice.

“We don’t anticipate trouble this weekend but we are prepared for any anti-social behaviour or criminal behaviour that may occur,” Assistant Commissioner Stuart Smith said.

He also warned partygoers that $500 fines would be handed out to people who crossed the line.

The caution comes with Parramatta facing an historic double, aiming to become the first club to complete a NRL and NRLW double.

No team has achieved the feat since the inception of the women’s competition in 2018.

The women’s team, who snuck into the finals with just one regular-season win, will aim to down a rejuvenated Newcastle at Accor Stadium before the men seek to end that 36-year wait for a title.

“It’ll be a special thing for the Polynesians who are aspiring to be in that role.

“I wished her (Taufa) good luck the other day, I think it’s pretty cool that we are in the position we are in today and can look to inspire the next generation.”

Taufa will only secede the captaincy if regular skipper Tiana Penitani, who is also of Tongan descent, fails to recover from a hamstring injury in time to play.

Paulo was invited to present jerseys to the NRLW side prior to last week’s upset win over minor premiers the Sydney Roosters and said he admired the growth of the women’s side under Dean Widders.

“It was a special moment and they’re pretty fortunate to be playing (in a grand final) in their second season,” he said.

“It was all about supporting each other and that’s the kind of culture we want to build at this club.”

Widders played four seasons at the Eels and said he knows exactly how big an occasion the chance for two grand finals on one day is.

“Being an ex-player, to see the men’s team there and us as well it’s obviously going to be a big week for the fans,” he said.

“We’ve sort of rode that wave a little bit and I hope both teams can produce some good performances and get the job done.”