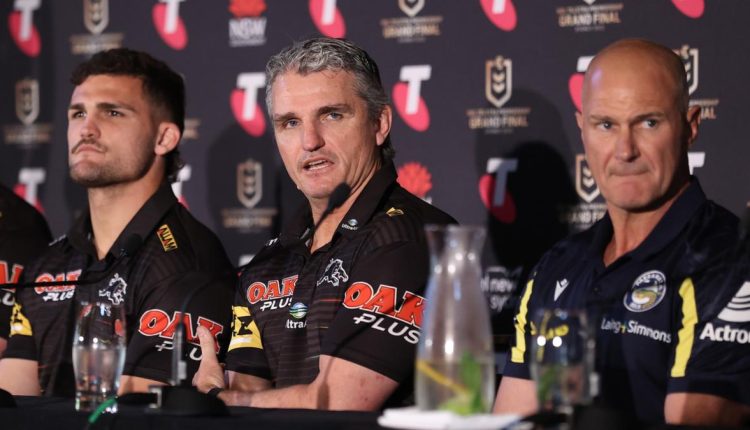 The Panthers won last year’s premiership after following a similar path, losing in week one of the finals before bouncing back and claiming the title.

The Eels demolished Canberra with their finals hopes in the balance and overcame North Queensland in testing Townsville conditions to get to Sunday’s grand final.

Despite boasting a 2-1 record against the Panthers this year, the Eels are at long odds to deny Penrith back-to-back NRL premierships.

Cleary, however, said at the grand final press conference on Thursday Parramatta’s tough road would make them an even more challenging opponent.

“They had plenty of tough games at the end of the season,” Cleary said.

“It’s pretty obvious by the game they had last week that they are battle hardened in a sense.

“We kind of went through something similar last year where we lost the first final so you can definitely do it (win a premiership).

“They’ve shown that and there are different ways to get there and anyone who makes a grand final deserves it, that’s for sure.”

Penrith, who enter their third straight grand final, are aware the Eels have been a bogey team for them since the start of 2020.

Only the Eels and Melbourne have beaten them three times in that period, and Parramatta have already notched up two convincing wins over the Panthers in this year’s regular season.

“We have played each other a lot over the last few years and there’s been a lot of close games that could have gone either way,” Cleary said.

“I think it’s just a good match-up and I think that’s one reason why we are both in the grand final.”

Cleary will weigh up a late change to his side before kick-off on Sunday with Mitch Kenny a strong chance to start ahead of Api Koroisau at hooker.

Kenny has tended to take the sting out of the game in the early stages in recent weeks.

In turn that has allowed Koroisau to work his magic.

“It’s something that we never really had a plan for, it just kind of happened,” he added.

Honestly, from week to week, I still don’t know which way is the best way to go.

“It’s something we mix and match a bit, it’s whatever we think is best on the day.”