Pedestrian knocked off his feet running blindly into Perth traffic 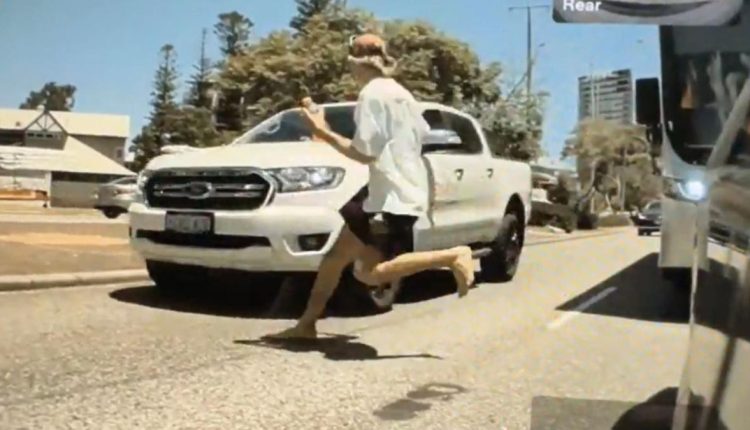 A young man is lucky to have escaped serious injury when he ran in front of traffic and into a moving car on a busy Perth road.

The man was knocked off his feet and sent sprawling to the ground when he ran into a moving Ford ute on Canning Hwy in Applecross.

WATCH THE VIDEO ABOVE: Man centimetres from getting wiped out by car on Perth’s Canning Hwy.

The incident occurred on east-moving lanes of the highway where the speed limit is 60km/h and is understood to have happened on Saturday.

Footage from another car showed the pedestrian stepping out from in front of a bus before the moment of impact with the ute.

The pedestrian appears to be OK, getting to his feet within seconds and moving to collect his things off the road.

The footage was filmed from the rear of another car and shared on Reddit with the poster saying: “If this was one second earlier he would’ve had a very bad time.”

Others agreed it was a lucky escape and a warning about crossing busy roads without checking the path is clear.

“Glad he’s OK but blindly running out in front of a bus was a very stupid thing to do. Hopefully, he has learnt a valuable life lesson,” one person commented.

“These people survive this long because other people are more situationally aware and responsible.”

Another described it as “the classic ‘never cross until the bus has gone’ scenario”.

“He’s going to remember that near-miss for his whole life,” they said.

Others noted he may have been running to beat the heat because he wasn’t wearing footwear and the temperature soared to 39.5C on Saturday.

The Public Transport Authority pointed 7NEWS.com.au to a Transperth campaign run in 2020 aiming to “change careless behaviours” around buses.

“While Transperth bus drivers are trained in defensive driving techniques to limit the number of injuries that can occur on board, many incidents involving young people happen not on the bus, but in the street surrounding it,” the agency said at the time.

“These incidents, such as walking around the front of a stopped bus into oncoming traffic, generally involves distractions from mobile devices or friends and are often the result of students being unaware of other vehicles moving around the much bigger bus.”

Another Qantas flight forced to turn back over ‘mechanical issue’

Man still on the run after alleged pursuit through Perth