One in four Aussies have a tattoo – so is it still fair to ban them from venues for it? 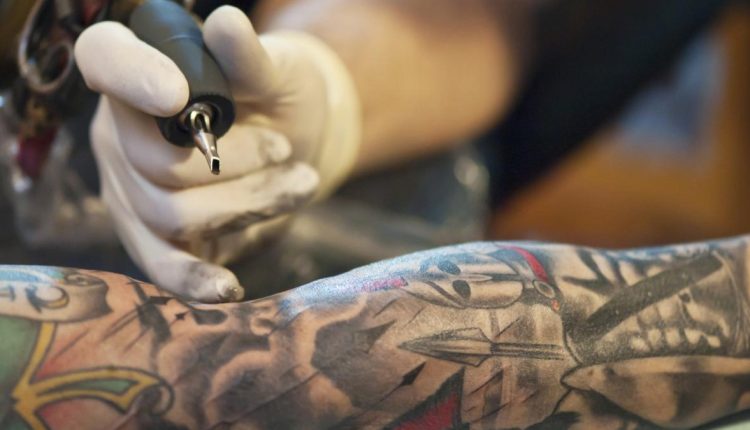 Whether it be a flower, inspiring quote, animal or cultural marking, more Australians are getting inked.

Yet despite surveys showing one in four Aussies have at least one marking, strict anti-tattoo dress codes still exist in most states.

Some are supposedly in place to deter gang-related crime while other venues enforce the ban as part of an ominous “blanket policy”.

But with so many Aussies getting tattoos and celebrities like Miley Cyrus, Rita Ora and David Beckham among those leading the charge, are the markings a valid reason to be refused entry?

The club apologised to James in a private message, but said it would continue to enforce a blanket policy of no face or neck tattoos.

James said it highlighted a need for a change in policy, telling 7NEWS.com.au that “not all facial marks are related to a bikie gang, they don’t immediately make you dangerous”.

And some experts agree, saying the “outdated” bans should be kicked to the kerb.

How do the states stack up?

Inked pub goers have shared stories of being banned from venues across the country because of their body art.

Illawarra man Tristan Page is among those, with the 24-year-old sharing how he is treated differently depending on the venue since getting a neck tattoo.

“I’m not a bikie, I’m not a drug dealer. I don’t drink that much, I’ve never been cut off, I’ve never caused any problems,” he told The Illawarra Mercury last year.

Despite this, he says he gets refused entry three or four times on a night out.

Popular restaurant Bedouin, which is frequented by celebrities in Sydney’s eastern suburbs, made headlines this year when it moved to ban tattoos, heavy jewellery and designer logos, claiming it will prevent “intimidating appearances”.

For Brisbane tattooist Stephanie Stiletto, a regular trip for an after work drink highlighted the issue when she was refused entry to a popular riverside bar because of her body art.

She says she was told by security at Black Bird Bar & Grill she could not come inside because of her tattoo of a small rose on her neck.

“I started laughing because I thought he was kidding but it was actually really awful,” she told The Sunday Mail in 2019.

Physical features are only a protected attribute in the ACT and Victoria.

“In Victoria, the equal opportunity act has physical features as a basis on which you can’t discriminate – that doesn’t happen elsewhere,” University of Sydney Law School professor Simon Rice OAM said, adding that it has been interpreted as including tattoos.

That may not stop bars from implementing anti-tattoo dress codes, but it could give the patrons grounds to sue.

Meanwhile, Queensland’s anti-discrimination laws are under review, but at present they do not stop pubs, clubs and restaurants from turning away people with face and neck tattoos from entry.

Anti-tattoo dress codes are not covered by the Queensland Anti-Discrimination Act – which was drafted 30 years ago.

The same goes for NSW, where the discrimination act prohibits unlawful racial, sexual and other types of discrimination but it makes no mention of tattoos, unless they are an important component of a person’s cultural heritage or religion.

Some WA venues also restrict access to patrons dependent on body art, with Perth cocktail bar Niche requiring knuckle, hand or neck tattoos to be covered and refusing entry to those with face or offensive tattoos.

The state has also taken a harsh stance on outlaw motorcycle gang tattoos, banning club patches and markings in public.

‘Out of step with society’

The relatively recent rise in popularity of tattoos has seen the body art go from something commonly associated with convicts and as important cultural markings, to a popular form of self expression, says Michael Cope, president of the Queensland Council for Civil Liberties.

“We live in a society in which people can wear whatever they like as long as they’re wearing something. I don’t see tattoos are any different from someone wearing jewellery or a hat,” he told 7NEWS.com.au.

“People shouldn’t be being refused access to local pubs or venues for irrational reasons. If someone’s behaviour is illegal then they should be removed.”

From a human rights perspective, the law says there must be a rational connection between the aim and the action taken, explained Rice, who specializes in discrimination and equality.

“Simply saying we don’t like the look, you cannot come in is not rational,” he told 7NEWS.com.au.

“You would have to be able to say, for example, we have had bad experiences with people with those tattoos because they show they’re members of that outlaw club.

Rice said navigating the issue was like moving through murky water.

“Even once you make that connection, what you do needs to be proportional to that,” he added.

For Cope, who works as special counsel with McKays Solicitors, the problem boils down to outdated attitudes.

“Tattoos are a common phenomena in our society. The attitude towards them reflects old fashioned views, but attitudes have changed and how people dress is fundamentally different,” he said.

“There is no safety issue about tattoos.”

In the case of cultural tattoos like James’, Cope says there is no suggestion it is in any way connected to criminal activity or intimidation and should play no role in choosing whether someone can enter a venue.

“Anti-tattoo dress codes are out of step with our society and there is no rational basis provided for it.”