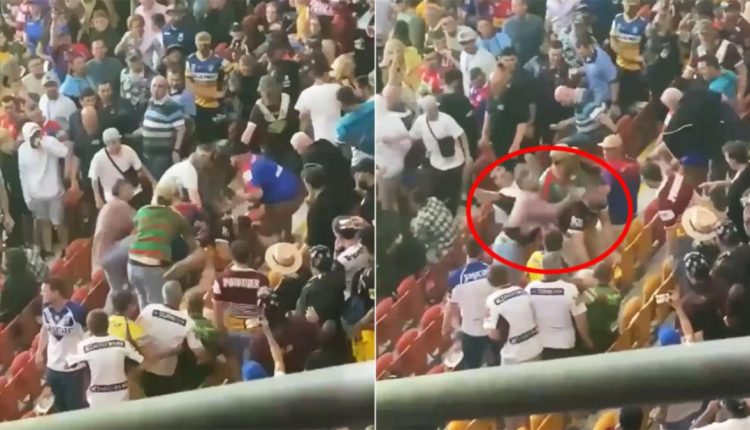 NRL boss Andrew Abdo has been left fuming after a violent brawl marred the opening night of Magic Round at Suncorp Stadium.

Midway through Brisbane’s 38-0 thrashing of Manly on Friday night, a wild fight broke out involving as many as 12 different spectators in the northern end of the western stand.

The vision of the incident, which you can watch in the player above, shows one man unleashing a sickening coward punch from behind at an unsuspecting victim.

“Hope this doesn’t sour what should be an amazing #magicround but this is happening far too often recently and needs to stop.”

Stunned onlookers can be heard on the video questioning why security hadn’t intervened to stop the violence after almost one minute of fighting.

NRL chief executive Andrew Abdo said the game would ensure any fans involved would be banned from future fixtures.

“There’s absolutely no place for violence at our games,” Abdo told News Corp.

“Aside from the action the authorities may take, we will also ban any fan who engages in violence in the grandstands. It will not be tolerated.

“Magic Round is a celebration of our game, our fans and families. Almost 150,000 fans will attend this weekend and we will speak with the Stadium, who oversees security, to ensure the right measures are in place.”

Queensland Police confirmed it was conducting further investigations with one man issued a public nuisance infringement and given a move on direction on Friday night.

“Police are working to identify those involved, however, no formal assault complaint has been received at this time,” Queensland Police told 7NEWS.

The disgraceful brawl took some of the gloss off a thrilling opening night of the NRL’s Magic Round in Brisbane, where nearly 150,000 fans are expected to pass through the gates across three days of action.

On Saturday the event is headlined by Melbourne facing Penrith for the first time since the Panthers won the preliminary final on the same ground last year before sealing the premiership.

The pick of Sunday’s games pits a resurgent Parramatta against an out-of-sorts Sydney Roosters.

The NRL is hoping this year’s event is remembered for moments of on-field brilliance rather than carnage left in its wake, as has been the case in its two previous iterations.

The tournament’s maiden venture in 2019 was overshadowed by a large number of injuries sustained on a hard Suncorp turf.

“Even though it’s a bit disappointing that we have weather that is not ideal we’ll be playing football and it will be fantastic football.”

While Magic Round was scrapped for the 2020 season, the 2021 event is best remembered for the NRL’s ham-fisted introduction of a crackdown on head-high contact.

While well-intentioned, the 14 sin-binnings and three send-offs dominated debate in the weeks and months afterwards.

Abdo claimed the tough action had yielded benefits, claiming there had been a reduction in HIAs, high tackles and judiciary charges.

“Our sport is very dynamic, but we are very comfortable with the learning curve that has been adopted by the players, coaches and the clubs,” he said.

The NRL say they expect a near-full house every day with 30,000 fans travelling interstate to Brisbane to generate upwards of $25 million for the local economy.

Magic Round stays in Brisbane

In recent weeks, there has been plenty of political brinkmanship about whether the NRL grand final might be moved from Sydney to Brisbane.

In turn, that has led to a to-ing and fro-ing over Magic Round’s long-term home.

On Thursday, the state’s Tourism Minister Stirling Hinchliffe announced that Brisbane would be retaining the event for a further two years.

“Queensland is the home of Magic Round, Queensland invented Magic Round,” he said, blissfully unaware the NRL pinched the concept from the Super League.

“Suncorp Stadium is the only place for Magic Round and it’s very exciting that the magic will continue beyond this weekend.”