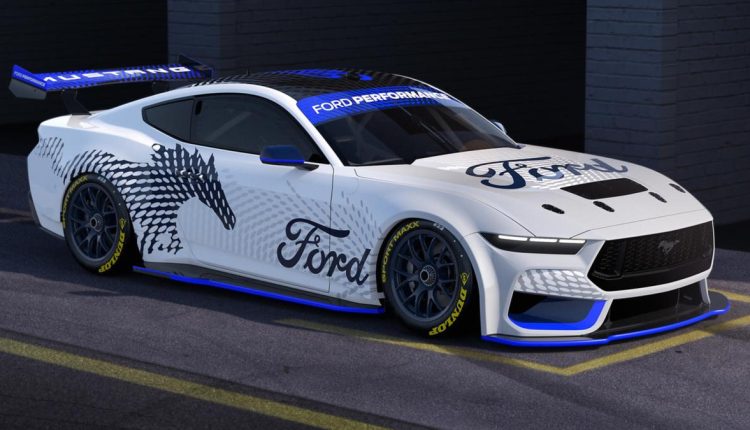 Ford Australia is gearing up to stage what it claims will be the first in-person reveal of the seventh-generation Mustang in racing form anywhere in the world.

Fittingly this first ‘Gen3’ Mustang Supercar will be piloted by Australian motorsport legend Dick Johnson for its first laps around Mount Panorama. Mr Johnson was the first driver of the outgoing ‘Gen2’ Mustang Supercar at the Adelaide 500 in 2019.

Dick Johnson Racing is Ford’s homologation team that has been designing, developing and building the new Mustang Supercar racer in conjunction with Ford Performance over the last two years.

The three-time Bathurst 1000 winner said that he’s honoured to be the first driver of the ‘Gen3’ Mustang Supercar prototype.

“My team and I have been racing Fords for more than forty years, we are very proud representatives of and ambassadors for the Blue Oval,” he said.

“We have been working extremely hard on making this car the best it can possibly be over the last couple of years, and to be the first person in the world to drive it after all of that work is fantastic.

“Any chance to drive around Mount Panorama is incredible, but to do it in Ford’s latest race car is an opportunity I simply couldn’t pass up.”

As part of the seventh-generation model’s reveal last month, Ford previewed a number of track-only racing Mustangs that will compete globally in a variety of racing series.

In addition to the Supercars version, Ford showed off renders of the GT3, GT4, NASCAR, and NHRA Factory X racing homologated versions.

The Blue Oval said it’s returning to factory-backed GT3 racing with the new Mustang GT3 IMSA racer that will debut at the 24 Hours of Daytona in 2024. It’ll be available for customers to purchase.

In terms of the regular seventh-generation Mustang coupe and convertible, it’s due in Australia in late 2023. Local pricing and specification have yet to be annonuced.

A 10-speed automatic remains available with both engines, however the six-speed manual is now exclusive to the V8.