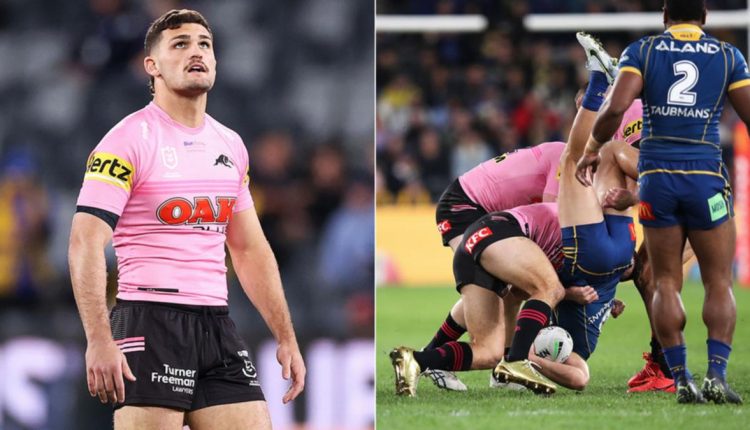 Nathan Cleary will come into Penrith’s finals campaign cold after receiving a five-game suspension for his spear tackle on Parramatta’s Dylan Brown.

Cleary was sent off for the first time in his career in Friday’s 34-10 loss to the Eels and won’t play again during the regular season.

You can watch the incident in the video above

He was handed a grade-three dangerous throw charge by the NRL’s match review committee on Saturday morning.

Similar tackles this year have resulted in four-game bans but owing to a previous charge in Penrith’s game with Brisbane earlier this year Cleary is facing a five-game spell.

If he takes the early guilty plea – a course of action which is likely for the Panthers, who are already without five-eighth Jarome Luai for the next month due to a knee injury – he would return for week one of the finals.

Cleary will miss Penrith’s five remaining regular season games against Canberra, Melbourne, South Sydney, the Warriors and North Queensland as they aim to wrap up the minor premiership.

In the unlikely event he fights the charge and then loses at the judiciary, Cleary will miss six games.

Thankfully for both Cleary and Brown, the Parramatta five-eighth suffered no serious injury after being driven into the ground at CommBank Stadium head first.

Brown said he was shocked at the collision but didn’t believe there was any malice or intent from Cleary.

Cleary, whose hopes of winning the Dally M Medal are now over, expressed regret on Friday night.

“Massive apologies for tonight (Friday),” he posted on Instagram.

“(I’m) filthy at myself for such a dumb moment that let the boys and the fans down.

“I’m not about that, it was a terrible technique and I need to be better.”

With Luai and Cleary sidelined, Penrith coach Ivan Cleary will be forced to lean heavily on Sean O’Sullivan, Kurt Falls and Jaeman Salmon over the next five weeks.

The halfback lost control of Brown while involved in a tackle with Liam Martin and James Fisher-Harris in the 17th minute of Friday’s game.

It left referee Todd Smith with no option but to send the playmaker off.

He was the first Panthers player to be dismissed in an NRL game since Travis Burns in 2012.

“I think all the boys know if they’ve been in that position they would feel the same,” said Ivan.

“I don’t think he meant to do it. He’s done a fair bit for our team over the years.

“I know Nat pretty well and this will fuel his fire for later.”